We all know very well that one of the biggest complaints ever made to the most used mobile operating system, Android and the tech giant Google is its huge fragmentation. However, now it seems that the tech giant Google has now managed to overcome this problem, as according to the latest reports, Android Nougat is officially the most widely used version of Android OS.

One of the biggest complaints ever made to the most used mobile operating system, Android and the tech giant Google is its huge fragmentation. With more and more equipment on the market, the number of versions also increases and its dispersion grows.

Every month, in the early days, the tech giant Google collects statistics from its own app store and shows which versions of its mobile operating system are most widely used.

Hence, the month of February was no exception and the numbers revealed shows a surprise. Finally, the tech giant Google’s most used mobile operating system, Android Nougat has assumed its leading role in this ecosystem.

Adding the usage rate of these two versions of Android Nougat, 7 and 7.1, already reaches a value of 28.5%, slightly above all other Android versions.

Well near the Android Nougat we still have the previous leader of this table, of course, I am talking about the Android Marshmallow, which claims for itself 28.1% of the devices. 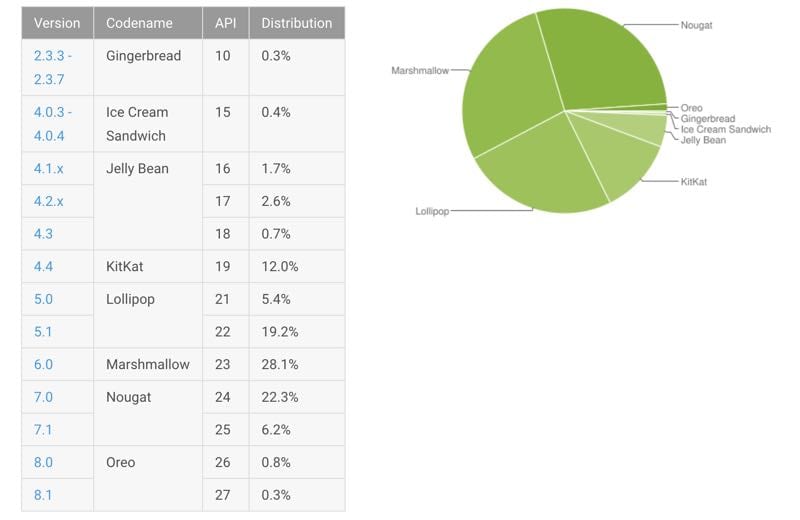 Further from these positions is the Android Oreo, which was released late last year. The latest version of Android is present in only 1.1% of smartphones using the tech giant Google’s mobile operating system.

The causes for this fragmentation of Android are already well known. Many blame manufacturers and operators who do not invest in these updates, keeping smartphones often without even the necessary security updates.

So, what do you think about this results? Simply share all your views and thoughts in the comment section below.