The tech giant Google has been trying to get everything closer to the versions of its mobile operating system, of course, Android, making it more easier for the manufacturers to upgrade their devices. However, now according to the current and latest reports, less than 1 percent of Android smartphones are running Android 8.0 Oreo.

Less Than 1% of Android phones Are Running Oreo

The tech giant Google has officially submitted to Android 8.1 Oreo, the first major update to its mobile operating system. With the arrival of this “stable” version, improvements are introduced and, in addition, some new features that users will love.

So, it is the time for speculation and development versions is over. The Mountain View presented recently the first major update of its mobile operating system, which comes with some developments related, among other things, to the optimization of software for smartphones cameras.

And not only that, it was also announced along with this update optimized distribution for low-end devices, Android Oreo Go Edition, which includes improving the performance of mobile phones with RAM of 1GB or less.

The tech giant Google has been trying to get everything closer to the versions of its mobile operating system, of course, Android, making it more easier for the manufacturers to upgrade their devices. However, it has not been a simple process and success has been close to zero.

This reality is seen every month in the usage numbers of Android. December data again show what we have seen, the tech giant Google with Android Oreo not able to manage yet to reach 1% of use in this universe.

The 0.5% it has at the moment is far from what would be expected, since the tech giant Google itself has already released a newer version, Android Oreo 8.1 as we told earlier. Interestingly, most of the remaining versions of Android, especially the older ones, are in decline, something that was already expected. 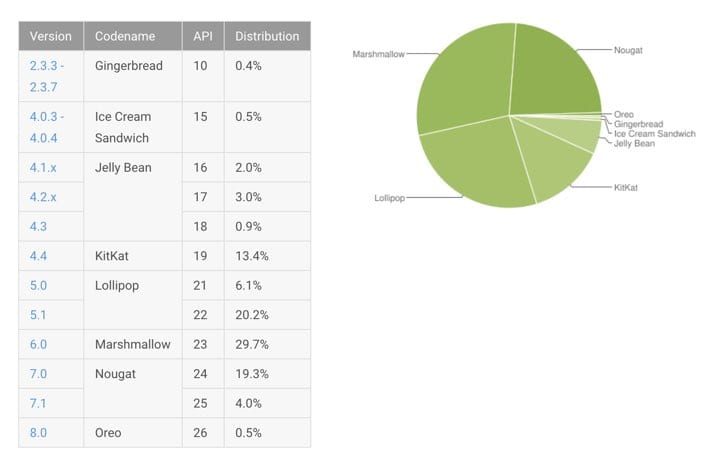 Whoever is absorbing this decrease are the most recent versions, with the main focus on the Nougat 7.1 version, which this month grew by 1.7 percentage points. However, Android 6.0 Marshmallow claims for itself almost 30% of the use in the Android universe.

These are not numbers that make the tech giant Google satisfied. As the tech giant, Google wanted to have a more focused distribution on the latest versions, probably on Android Nougat, and also highlighted for the new Android Oreo.

The right steps are being given by the tech giant Google, but the problem is recurrent and the causes are well known. Manufacturers are mostly retaining the updates. There are clear exceptions, which show that Android can and should be updated in fast times. More than the news, security updates are often in question, something everyone should have access to.

So, what do you think about this issue? Simply share all your views and thoughts in the comment section below.