We all know that the war between Android and iOS is not new and has fervent followers on both sides. However, a recent study has revealed something that many have already noted: there are more and more users switching from an Android device to an iPhone.

Android Users Are Switching To iPhone More Than Ever

The war between Android and iOS is not new and has fervent followers on both sides. But many users are immune to these conflicts and choose their smartphones based on their characteristics, evidence of good performance, autonomy, among other factors.

A recent study has revealed something that many have already noted: there are more and more users switching from an Android device to an iPhone.

Migration of users between the operating system and even between brands is normal. It is part of the market and offers that companies can make available. Android has managed to keep on top of preferences, but this scenario is changing, with a new wave of migration to iOS on iPhones.

The new move from Android to iPhone

This conclusion came from a study by Consumer Intelligence Research Partners, which concluded that users are changing their choice and again prefer Apple’s offer in the field of smartphones.

Specifically, this study showed that 20% of new iPhone users, who made the change in the last quarter, came from Android devices, and the biggest investment was made in the iPhone 7 and 7 Plus. This figure is a clear increase from the 17% recorded in the previous quarter. 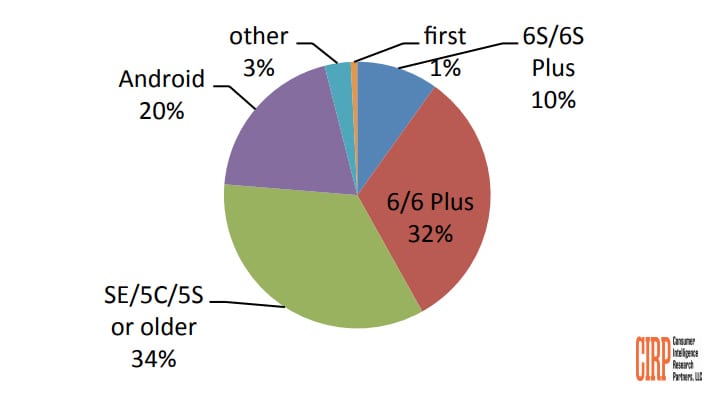 This new wave of migrants shows that confidence in the tech giant Apple products and the iPhone is again on the rise, which may be a great indication for the launch of the next iPhone.

The change within the Apple ecosystem

In addition to the Android migration, the Consumer Intelligence Research Partners study also revealed that even within the tech giant Apple universe there are changes.

If so far the most used model was the iPhone 6S, however, the current choice is falling on the latest models, iPhone 7 and iPhone 7 Plus. These two accounted for 81% of new devices purchased this quarter.

There is also an interesting move that shows that the tech giant Apple’s choice of endowing Plus models with unique features was successful. Both the iPhone 6s Plus and the iPhone 7 Plus were the fastest growing (10%), jumping from 32% to 42%, respectively.

This is a great setting for the tech giant Apple and the arrival of the iPhone 8. There is great consumer confidence in the brand and a great expectation in what this new model will bring of news.

So, what do you think about this unexpected dramatic changes? Simply share your views and thoughts in the comment section below.