Hacktivist group Anonymous hacks the company servers Freedom Hosting II and lay down some 10,000 web pages based on Tor, representing almost 20% of the web deep. Hackers claim that at least half of the web pages were child pornography.

Contents show
Anonymous Hacks And Takes Down 10,613 Tor Websites On Dark Web
The Depths of the Internet
More than 10,000 pages of the Deep Web fall due to an attack

Anonymous Hacks And Takes Down 10,613 Tor Websites On Dark Web

The Internet we know and we use in our everyday lives is just one part of the network. As we access the cyberspace which is actually called Surface Web.

But 90% of the Internet is in the “hidden face,” called Deep Web, which every time we hear more. This, in turn, houses other hands, the Dark Web as its name shows, is darker and houses encrypted and anonymous content that is accessed through the Tor network.

This free software gets its name from The Onion Router because it is structured layers to allow navigate jumping from one to another with encryption protection that hides the IP. That is why in the deep part of the network it prevails anonymity.

The Depths of the Internet

To understand this better is often used as an example like an iceberg lost in the immensity of the ocean. The Internet is the iceberg, and its visible part corresponds to the “normal” pages. That is, the websites indexed by search engines, as it is impossible to know the exact number of pages that make up the Deep Web, but it is estimated that the weight of the contents is over 7,000 TB of information. 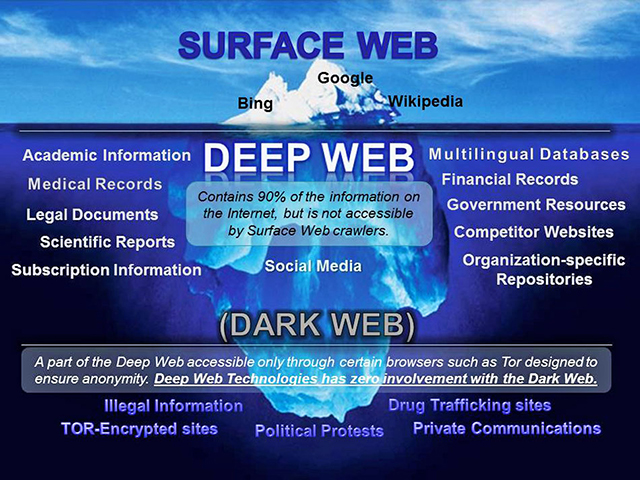 The network of networks consists of 5 levels, and most users only know the first, which is the tip of the iceberg. If we go down to the second level, which would be just below the surface, we find the sites that are not indexed and accessed only by the “qualified people.” Passing the third level we can begin to see illegal content, that it is more difficult to trace.

In the room, they inhabit all kinds of illegal sites, as they are like child pornography and traffic of arms, drugs, and even organs. The fifth and final level is what is known as The Darknet or Dark Web, which is the authentic territory of the hackers and the darkest area of Internet, where there is no protocols or security.

More than 10,000 pages of the Deep Web fall due to an attack

As stated in the media ‘The Verge,’ servers Hosting Freedom II suffered a major attack by the world’s leading online hacktivist group, Anonymous.

This attack caused the fall of around 10,000 web pages of Tor, mainly engaged in child pornography, say the authors. To give us an idea of the magnitude of the attack, that number of sites represents one-fifth of the depths of the iceberg.

Those users trying to access this type of illegal content found instead the message: “Hello, Freedom Hosting II, have been hacked”. Although the hackers claim that half the content that was hosted on the servers was attacked is the child pornography, it ‘s hard to ascertain that it was indeed so. This is because one of the main features of the Deep Web ‘The anonymity’.

Moreover, the Hackers, who claim to be part of the Anonymous group, claim that at least half of the data and information they found on the servers they discharged was child pornography as we told earlier.

But, it is currently impossible to verify (because you can not access the sites), but taking into account what is known of this kind of companies hosting for the deep web is quite possible. In fact, Freedom Hosting company was involved in a child pornography case for years according to the sources.