Finally, the wait is over, as Apple has officially announced the first virtual event of 2022. The tech giant will be holding its next online event with the tagline “Peek Performance” on March 8.

However, Apple has not disclosed what new products will be introduced at the event. According to the rumors, this Spring event will bring iPhone SE 3 5G, new iPad Air, and new Macs with Apple silicon chips.

According to the Tweet posted by Greg Joswiak, only the time and date of the event is announced. On March 8, the Apple Event will begin at 10:00 AM PST (11:30 pm IST). 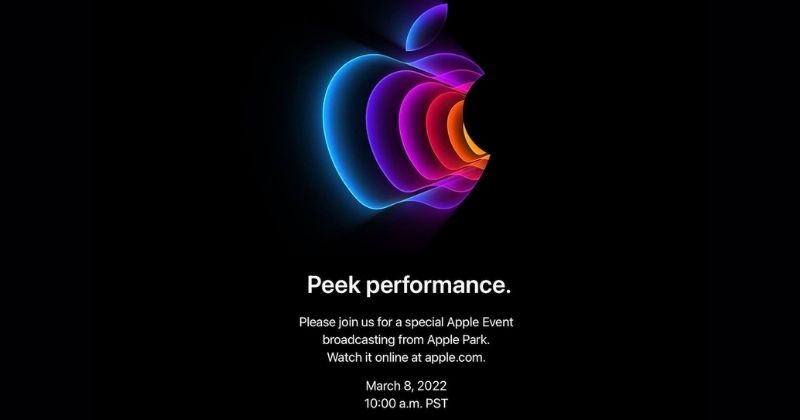 The upcoming Spring event 2022 will be live-streamed on different platforms. All Apple gadget users like iPhone, iMac, iPad can watch it on the Apple TV app. The event will be available to watch on the official YouTube channel and the Apple website also.

Here’s What to Expect from Apple Event

The company hasn’t provided details on what new devices it will launch. However, there are rumors that the event will likely launch a third-generation iPhone SE. This new device will bring new hardware and 5G connectivity.

Apart from iPhone, Apple is unveiling its new Mac lineup based on M2, M1 Pro, M1 Max. There will be at least two new Macs will be announced, Mac Mini and MacBook Pro. The new iMac Pro will come with M1 Pro and M1 Max option, and the Mac mini will have an M1 Pro.

There might be a redesigned MacBook Air which is similar to the MacBook Pro launched last year. It can have a notch in the display and thin bezels. The new MacBook Air may have a colorful design and mini-LED displays.