We all know very well that the war between the tech giant Apple and Google products is not recent, but it is possibly one of the fiercest in the online world. As recently, a new war occurred that opposes the two American giants, the construction of the image of the burger.

The war between the tech giant Apple and the tech giant Google products is not recent, but it is possibly one of the fiercest in the online world. If the operating systems already give a lot of headaches, then what about the cheese’s position on the hamburger?

The tech giant Apple and the tech giant Google have some of the best products of today’s technology, but they also compete in one of the fiercest battles in the tech world, Android vs. iOS. With loyal supporters in each of the ranks, this is perhaps one of the most controversial issues raised.

In an increasingly visual world and where emojis increasingly serve to communicate, especially to the young, certain details begin to gain importance. And it is from the world of emoji that comes to a new war that opposes the two American giants, the construction of the image of the hamburger.

In a discussion tossed on Twitter by Thomas Baekdalm, possibly for joking, the writer asked his followers about the best position of the cheese in the composition of a hamburger.

I think we need to have a discussion about how Google's burger emoji is placing the cheese underneath the burger, while Apple puts it on top pic.twitter.com/PgXmCkY3Yc

This doubt arose from the comparison of the emoji of the hamburger of the tech giant Google and the tech giant Apple, where the position of the cheese varies. In Google, the cheese is the last component is positioned below, following the meat, while the Apple is halfway, over the meat.

A publication that seemed to have a ridiculous subject, it quickly reached success with more than 1800 comments, 20,000 retweets, and 41,000 favorites. 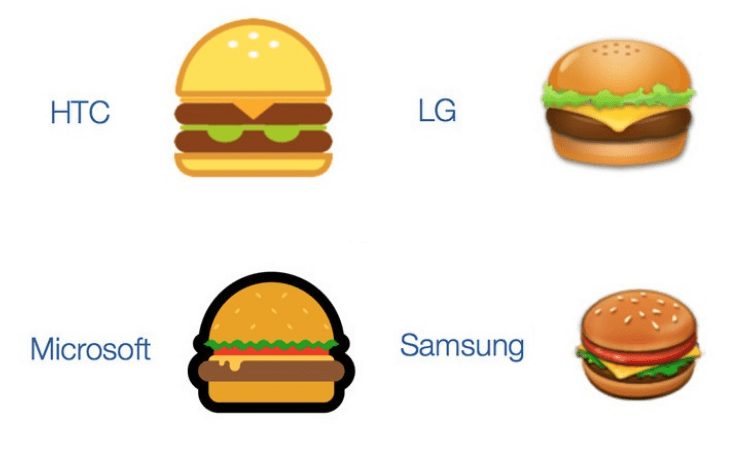 This comparison quickly added other examples, with burgers from the tech giant Microsoft, South Korean giants like Samsung and LG along with the Taiwanese giant HTC to also position the cheese differently.

Sundar Pichai, CEO of the tech giant Google, got ready to play the game, saying they were going to drop everything they had on hand to discuss the matter on Monday.

Will drop everything else we are doing and address on Monday:) if folks can agree on the correct way to do this! https://t.co/dXRuZnX1Ag

This is a discussion that can be considered without great sense, however, the truth is that it ends up having a humorous side, highlighting at the same time the different visions of a simple “object”, that depends on a lot on the personal taste of each person.

So, what do you think about this? What is the ideal position for cheese in a hamburger? Simply share your views and thoughts in the comment section below.