Apple has released a new version for its latest Operating system update iOS 15.1. The latest update brings SharePlay, ProRes video capture, and more features. Let us take a look at all the features and how to install the new iOS.

SharePlay was supposed to come in iOS 15, but it has rolled out now with iOS 15.1. It allows the users to call friends, family, or watch movies, TV, or listen to music together. It also syncs the content so everyone can watch it together. 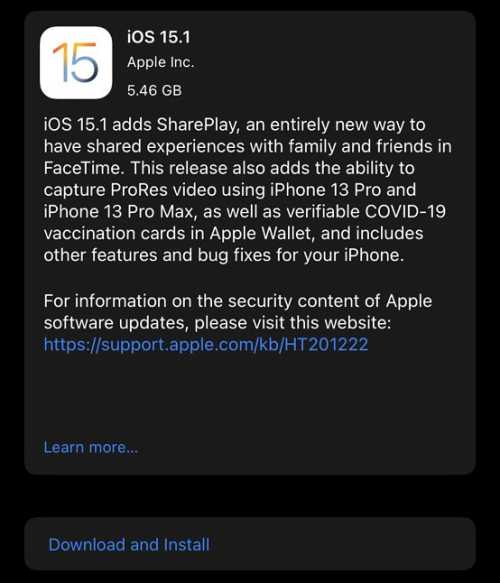 Apart from SharePlay, iOS 15.1 has brought improvements to the camera for iPhone 13 Pro. In addition, for the latest iPhone, a new Auto Macro toggle is available that lets you to switch off the automatic macro mode.

The HomePod 15.1 software brings Lossless Audio and Dolby Atmos Spatial Audio to HomePod and HomePod Mini smart speakers. If you want, you can turn on and off the Lossless audio and Spatial audio from the Home app.

With the iOS 15.1 update, Apple users can add their Covid vaccine card to the Wallet app. It is similar to Google’s Android version.

The update has also brought improvements in Apple’s Home app, Shortcuts, and more. It is said that for iPhone 12 models it has updated the battery algorithm.

The iPhone users will get the iOS 15.1 update automatically on their smartphones. It’s an over-the-air update. However, you can check whether your device has got the update or not from Settings >> General >> Software Updates. If it’s not updated, you can click on install the update now.

Apple rolled out the iOS 15 update in September; after one month, it brings iOS 15.1 with the features that were missing earlier.