We all know very well that due to the scale of manufacturing and sales, each generation of the iPhone presents at least one notable problem. As recently, some iPhone X owners have reported that their screen reportedly showing mysterious Green Line of Death.

Contents show
Apple iPhone X Issue: Green Line Of Death
Some iPhone X presented a green line that runs along the side of the screen

For better or for worse, today one of the most talked about mobile devices across the Network is Apple’s, iPhone X. After a few days in the international market, most users of the new iPhone X are delighted with its acquisition, although as it is usual in products of this technological level, there are always some units that present unexpected problems and that, due to their high price, can be a blow to their owners.

This is something that is being detected in the last hours based on the reports of users from different points of the globe. And it is that, as far as we have been able to learn, some units of the popular Apple device, are showing a sudden and strange green line at the edge of the screen that specifically crosses it vertically in its entirety.

This strange event sometimes occurs on the right side of the screen, while other times it happens on the left side of the OLED panel of the device. One of the theories that are being considered at this time regarding the event, is that it could be a problem with the electrical system.

This possible failure could be causing the lines of green pixels to light up on the screen suddenly, starting at the top of it to the bottom. Maybe you remember that last year a similar pink line was seen on some screens of Samsung Galaxy S7 Edge, something that the firm ended up determining as a hardware problem on the phone itself. 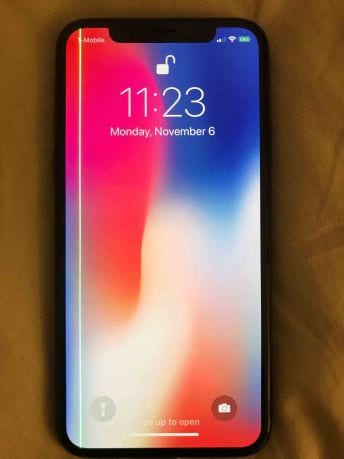 Now, if we find a failure of these characteristics, what can we do? Well, there have already been some cases of this type in which the affected person took his/her phone to the Apple Store where he/she bought it and was replaced immediately. This event tells us a couple of things, firstly, that this is not a problem that can be solved with a software update, and secondly that the tech giant Apple is initially willing to solve it by replacing the unit that suffers the failure.

In fact, there are already several owners of iPhone X who have published images on social networks and on the technical support pages of the Apple revealing this ailment. Moreover, they say that, when opening the box after buying the phone, these units seemed to be working perfectly, and without suffering any damage or abuse, the green light line appeared from nowhere through the left or right side of the device.

This seems to affect iPhone X models in various regions of the world and turning off the phone and restarting it does not eliminate the problem.