The Cupertino tech giant has filed a patent for a new computer concept, i.e., a Magic keyboard with a full computer inside.

The Magic keyboard will have a whole computer in it. Moreover, it has a trackpad to skip carrying a mouse. In 2020, Apple filed a patent at the United States and Trademark Office. This concept by Apple will compete with laptops and desktops.

It will be a standalone device that doesn’t need any cords or cables. The users will need to bring their own display to the setup.

Apple Magic Keyboard That Has a Computer Inside It 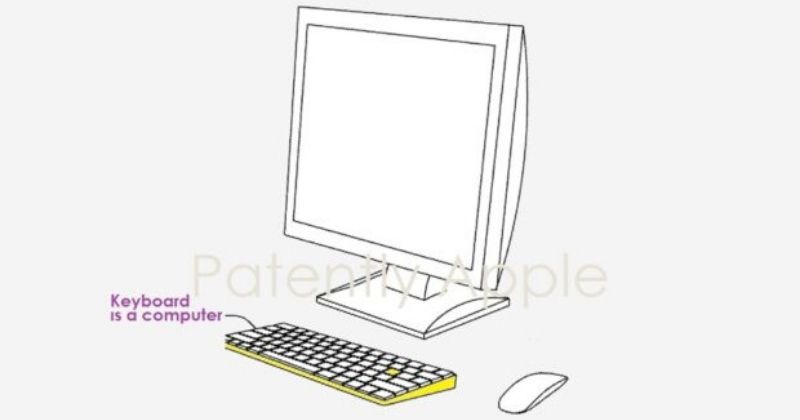 According to the patent, “A strong demand for portable computing devices which also deliver high performance has driven miniaturization and reduction in the size of the once bulky computing components used to power and drive the devices.”

Apple will bring all the essential components like batteries, chipsets, integrated circuits, and memories. The user just needs to connect a monitor to it.

The patent says the user can make the keyboard portable by folding it. Moreover, the device comes with heat-conductive material to cut the heat generated by the device. However, the company has not confirmed whether it will release such a device or not.

It is a portable desktop computer in a magic keyboard. Just like Mac Mini, the users should get their own display to the setup. This patent was filed in 2020 and is published this week by the US Patent office.

Apple is expected to launch a MacBook Pro 13-inch, Mac Mini, iMac 24-inch, and a redesigned MacBook Air. All of these devices are powered by M2 chip.

It is said that the new Macs might launch in March, May, and June. Moreover, on March 8, the company is expected to launch a 5G iPhone SE, 5G iPad Air, and a new Mac. Also, the tech giant might release iOS 15.4 update that brings face mask-friendly Face ID, a new tap-to-pay feature, new emojis, and Universal Control.