Apple has launched an AirTag detector app for Android users that will help boost privacy. On Monday, the company launched Tracker Detector app on the Google Play store. This app will help users scan nearby AirTags or other similar trackers that are with them without their knowledge.

The Tracker Detect app is now available on Play Store and is compatible with item trackers that are supported by Apple’s Find My Network.

In the app description, it is mentioned that Tracker Detect can scan for item trackers that are separated from their owner. 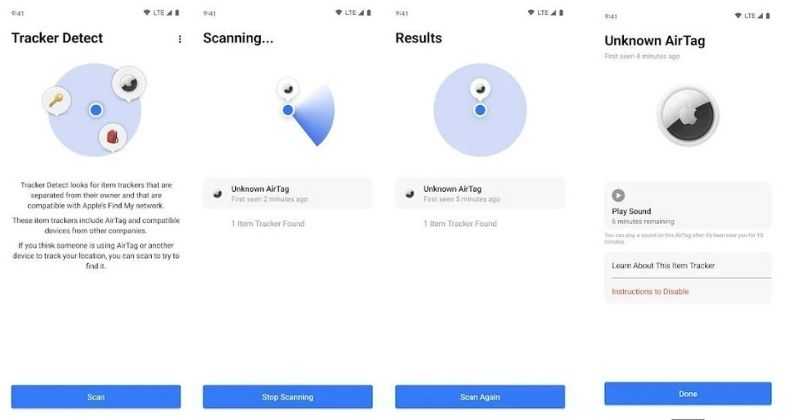 So, if any Android user feels that they are targeted by someone and are getting stalked using AirTags can check the devices using this app. There is a scan option in the app that will let you see any unwanted AirTags around you.

Apple said, if any tracker is moving with the user for more than 10 minutes, the Tracker Detect app will help to locate it by playing a sound and will guide to disable it.

In a statement, Apple spokesperson said,

“We are raising the bar on privacy for our users and the industry and hope others will follow.”

If the tracker identifies an AirTag, then you need to follow the instructions given on the screen. It will provide you with three options to deal with.

In June, Apple updated AirTags with new software to adjust the time period after which an AirTag that is not with the owner will play a sound when moved. The time was shortened to between 8 and 24 hours, from its three days.