It is already tomorrow the tech giant Apple will hold its annual event to present the new iPhones. If the rumors surrounding these new devices give us some certainties, there are still some additional surprises that may arise at the last minute.

The latest forecast comes from a reputable source and accounts for something that many may find strange. It is now said that the tech giant Apple will be able to introduce a new iPad Pro, with the so-called USB-C type port.

It is still just a rumor, with a good basis of credibility, but there are those who are pointing out that the tech giant Apple will present a novelty that will completely change the universe of the iPad and even the other equipment of the brand.

Ming-Chi Kuo, a well-known analyst associated with the tech giant Apple’s supply chain, has now revealed some of his predictions, which he thinks are coming up too soon, probably already tomorrow.

According to Kuo, the most relevant news will be the presentation of a new iPad Pro, which will feature 2 important news. The first will be the arrival of Face ID, for user authentication and the replacement of the Lightning port with a USB-C. 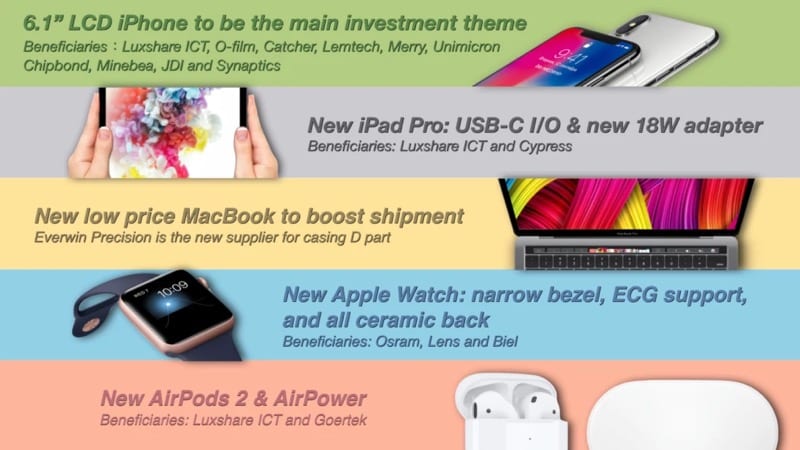 If this change is confirmed, the tech giant Apple will be completely changing its philosophy and embracing a standard that most brands already use. Coming to this change will also bring a new 18W USB-C type charger, which has already been seen several times.

In addition to this possible news, there is still the likely arrival of a new low-cost MacBook, which will replace the current 12-inch MacBook. This model will also feature Touch ID, but without the Touch Bar.

Moreover, Ming-Chi Kuo further notes the end of September or early October for the arrival of the 6.1-inch iPhone, known as the iPhone “Xr”. This delay will be due to mounting problems and the display.

Finally, Kuo gives hints about the new Apple Watch 4, which should have electrocardiography (ECG) and ceramic back. The screen area will be larger thanks to a smaller frame.

This news seems to meet the already known iPhone. There are three new models, the iPhone Xs, iPhone Xc, and iPhone Xs or Xr Plus, and some images have appeared that seem to reveal their designs.

This change from the tech giant Apple to iPad Pro, if it is confirmed, is one of the most surprising and even strange. It is still too early to say anything with any level of confidence. Tomorrow, on the 12th, the tech giant Apple will simply reveal to the world what it has been preparing.