We all know very well that artificial intelligence has reached the mobile devices to stay for many purposes. Now, according to the latest reports, the British multinational semiconductor and software design company, of course, ARM wants to overtake Intel with its next-gen processors.

ARM Wants To Overtake Intel With Its Next-Gen Processors

Many of you might don’t know that ARM processors are actually present everywhere and make most of the equipment we use nowadays at work. If the best known are the Intel and the AMDs, the ARMs actually have a greater profusion and use.

Artificial intelligence has reached the mobile devices to stay for many purposes. We no longer speak only about the assistants who can perform more or less tasks for us, but of internal processes that help the phone to be more fluid, that improve the result of the cameras.

So, basically apart from the virtual assistant, we are talking about some extraordinary features like invisible algorithms so that everything works better, and for its operation, the more specific hardware is needed.

ARM already presented its DynamIQ last year, a configuration of cores that went beyond the classic big.LITTLE standards to place different cores at the service of an optical operation of the machine learning codes. Now the British have gone a step further and already have their own chip performing machine learning tasks, the new Project Trillium.

Being used in different areas, these processors now begin to compete more directly and the ARM has a well-defined goal. Yes, now according to the latest reports, ARM wants to overtake the giant American chip manufacturer, of course, Intel with its next generation of processors

With the tech giant Microsoft’s idea of bringing Windows 10 to ARM processors, there has been a more direct comparison between these two processor architectures and more direct competition.

The latest ARM proposal is the Cortex-A76, expected to hit the market later this year. This new weapon from ARM promises a 35% improvement in performance, but according to the ARM, should not stay here according to what the company plans show. 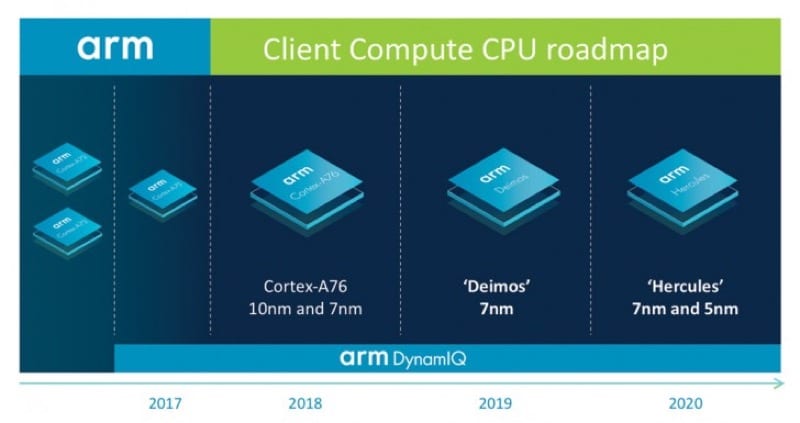 For starters, the A76 will also be upgraded, being built at 10nm and 7nm, and will compete directly with the giant American chip manufacturer, Intel’s i5-7300U processor, with the obvious advantage of achieving lower power consumption.

There will also be news in the coming years, with the arrival of Deimos, built in 7nm, and Hercules, which will be manufactured in both 7nm and 5nm technology. These new processors will arrive in 2019 and 2020, promising an overall improvement of around 15%. 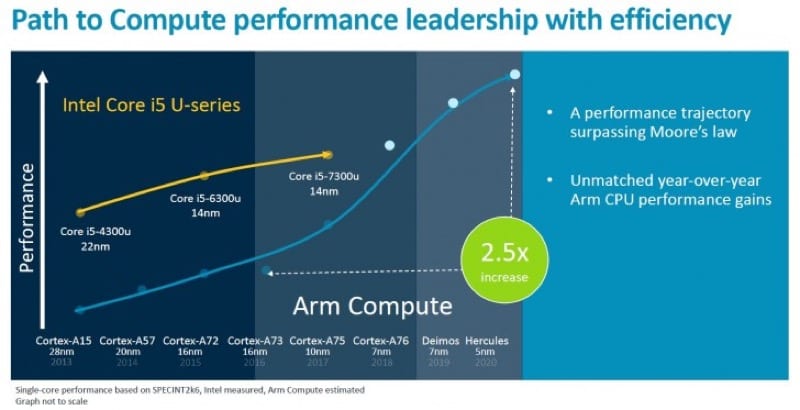 As for the direct comparison with the competitor like the giant Americal chip manufacturer, of course, Intel, ARM is betting strongly on its processors. Performance growth has outpaced what the giant chip manufacturer Intel has offered, while at the same time being able to keep pace with developments in manufacturing architecture.

This can be proven in the direct comparison between the ARM Cortex-A76 and the Intel i5-7300U. With an identical performance, it has a much lower power consumption, in the various powers that Intel can achieve.

The arrival of Windows 10 on ARM, whose first proposals are already being prepared by the different manufacturers who embraced this idea, will bring even more interest to the ARM processors and place them directly in competition, in normal scenarios and that users can confirm.

Hence, ARM’s plans are clear and are just beginning to take shape. As the giant American chip manufacturer, of course, Intel will be a target, with new proposals and new areas where ARM processors will be available.