We should admit that there are some songs that we love so much that we can’t resist ourselves singing along. However, while singing our favorite music, sometimes we forget the lyrics. This happens with literally everyone.

That’s why lyrics apps for Android exist. Since we now love to listen to music via our Android devices, lyrics apps have become essential. Lyrics are one of the vital elements of a good song. With the help of lyrics, we can understand and feel the song we love.

Also Read: How to Automatically Play Music With Lyrics On Android

Not only do Lyrics help to understand the song, but it also enhances the overall music listening experience. Many lyrics apps are available on the Google Play Store to show you songs’ lyrics. Hence, this article will explore the list of best Android Lyrics apps that every music lover would love to have. 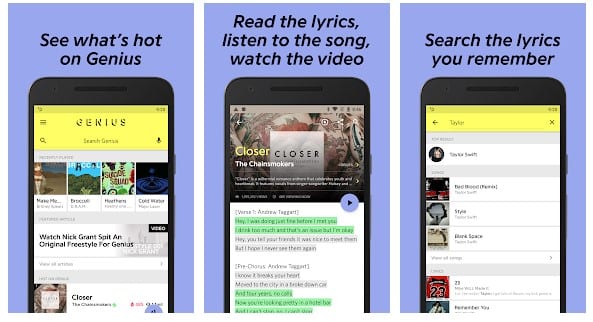 Genius is an app that hosts the world’s biggest collection of song lyrics and crowdsourced musical knowledge.

As of now, the app has lyrics of over 1.7 million songs. You can use the Genius mobile app to find annotated lyrics for almost all your favorite songs.

Other than that, Genius can also be used to find lyrics for the songs playing around you. Overall, it’s a great lyrics app that you can use on your Android. 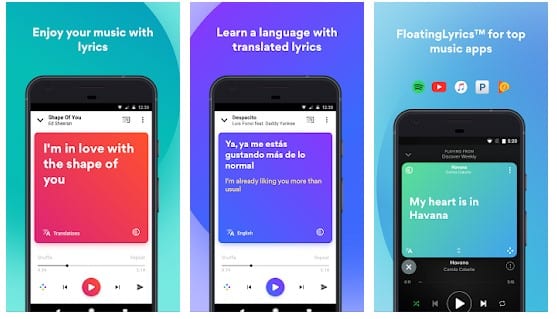 Musixmatch is a full-fledged music player app available on the Google Play Store. The app provides almost everything needed to be the best music app for Android. However, the app is known for its lyrics collection.

Apart from that, MusixMatch can integrate with Soundcloud, Pandora, Google Play Music, etc., to show you the lyrics. You will find lyrics for almost every song with Musixmatch Lyrics. 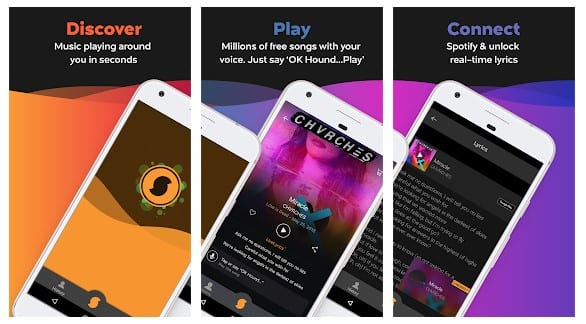 Well, SoundHound Music Search & Play is pretty much similar to the Shazam app. It can quickly listen and identify the song playing in the background.

Once recognized, the app displays full songs and videos with real-time lyrics. One of the most useful features of this app is that it saves all the music and songs you have identified before. 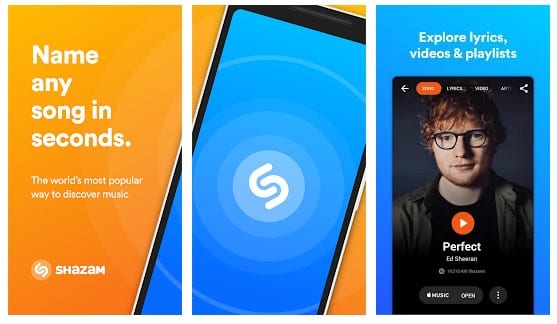 Shazam is probably the best music identification app available for Android. With Shazam, you can quickly identify any song within a few seconds. It shows you the artist’s name, lyrics, videos, and similar playlists after identifying a song.

To get the song lyrics, tap on the ‘Lyrics’ button when the song screen opens. The app will show you the lyrics of the recognized song.

Apart from these, Shazam can also be used to find out what’s popular in your country and get recommendations based on songs you listen to. 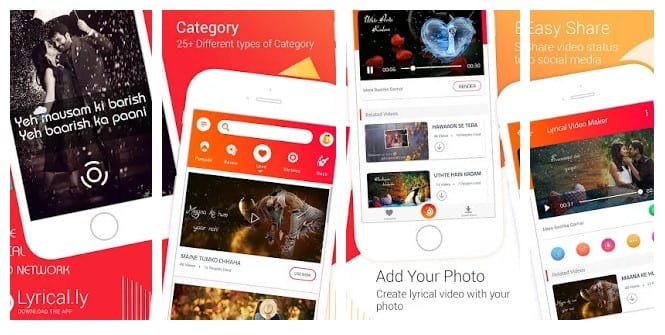 Lyrical.ly is not precisely a lyrics app, but it can help you find a song’s lyrics. It’s a video status maker application that lets you create lyrical video songs with your own photos and videos.

It has a large lyrical video song library, which you can use while creating a video. It automatically shows the lyrics of the selected song, but you can’t add your own song on the app. 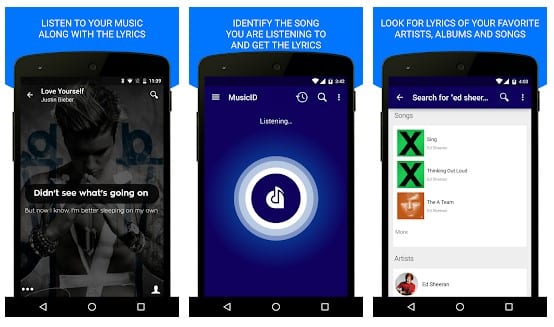 Lyrics Mania is one of the great lyrics apps available on the Google Play Store. With Lyrics Mania, you can effortlessly search for an artist or song to get its lyrics instantly.

It also has an integrated music player that lets you listen to your favorite music and shows you the lyrics in real=time. It’s a free app, but advertisements support it. 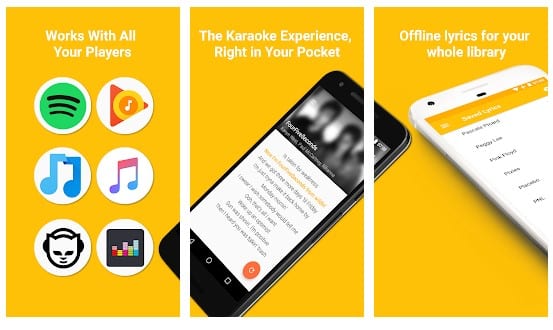 If you are looking for an open-source lyrics app, then Quicklyric might be the best choice for you. Guess what? The Quicklyric Android app can show you the lyrics of any song in just a few taps.

You also get an option to download the lyrics for offline playback. Quicklyric has a premium version that offers a few other features like a nigh mode, new themes, no-ads, and support for Android wear devices.

The app’s interface is pretty good, and it’s one of the fastest lyrics finder apps that you can use on your Android smartphone. 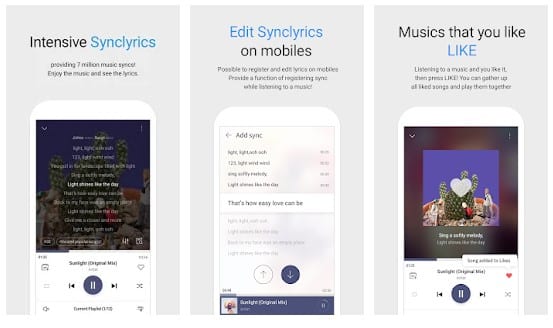 Are you searching for an Android app that can load lyrics automatically, then you need to give AlSong a try. It has a music player that lists all music files stored on your smartphone.

As soon as you play any song, the app automatically displays the lyrics. However, the database of ALSong is small compared to all other apps listed in the article. 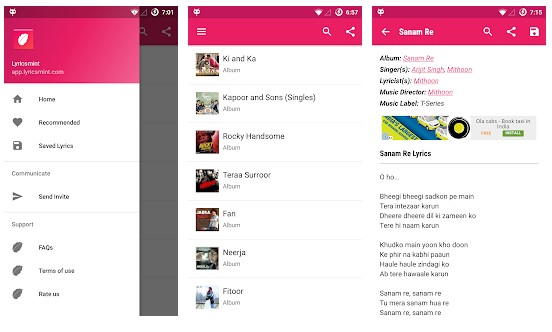 If you live in India and love to listen to Bollywood songs, then LyricsMint might be the best pick for you. The great thing about LyricsMint is that it provides users with lyrics for the Latest Bollywood/Hindi Movie songs and some non-Hindi files.

Another best thing about LyricsMint is that it allows users to save lyrics for offline playback. That means, even if you don’t have a working internet connection, you can use LyricsMint to access the saved lyrics. 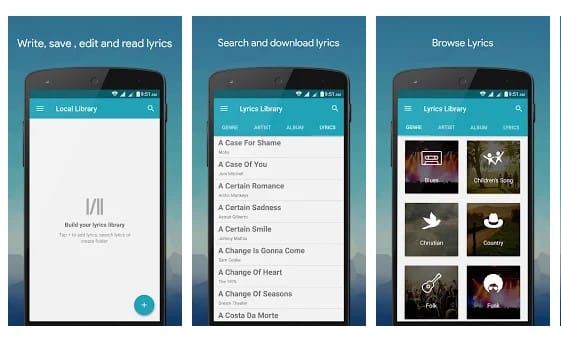 As the app’s name says, Lyrics Library is an Android app that is meant to write, save, edit, read, and share lyrics. The great thing about Lyrics Library is that it allows users to search lyrics online and download them.

Not just that, but you can also edit the lyrics after downloading and adding chords over your lyrics. So, Lyrics Library is another best Android Lyrics app you can use right now.

These are the best Android Lyrics app that every music lover would love to have. If you feel that the list misses any essential app, please drop the name in the comment box below. I hope this article helped you! Please share it with your friends also.