“Bhai” is an Indian word for a brother, and it’s written as typescript and combines “Bhai” from Hindi and hi, bye, and other English words. According to the official website, the code’s entry point begins with “hi Bhai,” and the syntax ends with “bye Bhai.”

“Bhai-lang” has its syntax, similar to Java and other programming languages, and every instruction must contain the word ‘Bhai.’ All the code written inside these tags will be valid. At the same time, everything outside of it will be ignored.

Bro-Code and Memes in Programming Language 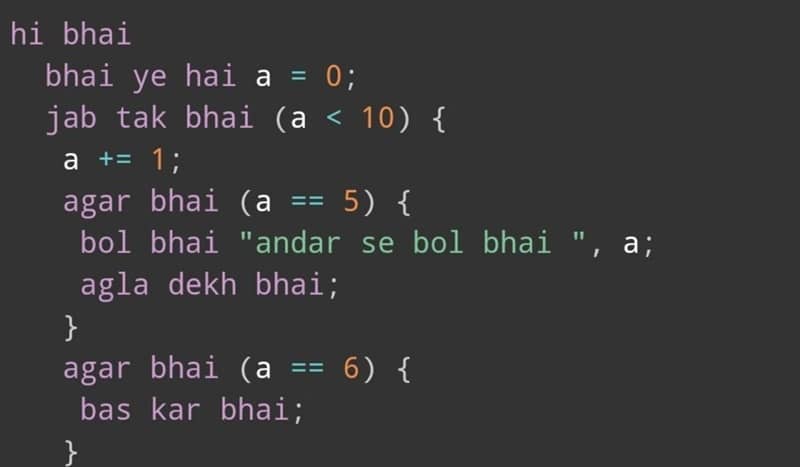 The language also has its own GitHub page, where users can see the source code and entire directory of how to use built-ins, conditionals, and loops. Numbers and strings are like other languages, and “Sahi(right)” and “galat(wrong)” are the boolean values. The Indian meme “Arre Bhai Bhai Bhai” also shows up when a developer or coder makes a mistake.

Many memes have flooded Twitter as many people shared their hilarious takes on the new programming language. The language creators also said “Bhai-lang” results from an inside joke.

Imagine #bhailang as a Styling language…

Shark Tank India,s Ashneer Grover’s dialogue, “Bhai kya Kar Raha hai tu (brother, what are you doing),” has also made its way into the language.

The website of “Bhai-lang” also has a playground where users can try out codes using the new language. If the code runs successfully, the programming language gives the “Shandar Bhai” message in green color as output.