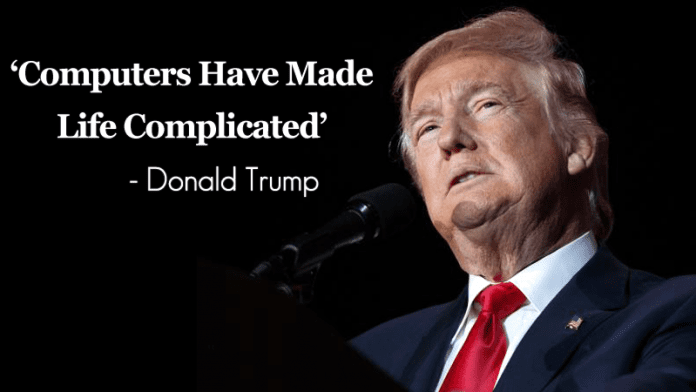 What if I say that President-elect Donald Trump “Hates Computers”? Yes, sounds really weird right, as it should be. Hence, Trump stated that don’t blame Russia for hacking, simply blame computer as they have made our life complicated.

President-elect Donald Trump insisted in his skepticism about the Russian hack and said he knows “things that others do not know and therefore can not be sure of the situation.”

Donald Trump said the information will be public “Tuesday or Wednesday.” He also declared himself an expert on the subject. As he stated, “I know a lot about hacking, the hacking is very difficult to prove, because it could be someone else.”

The president-elect Donald Trump also said that no computer is secure against hacking and important messages should be sent by mail, expressing a renewed skepticism about the security of digital communications.

“You know, if you have something really important, write it down and have it delivered by courier, to the old way,” said Republican businessman to the reporters at his annual New Year’s party which was held on Saturday night.

“Because I’ll tell you: no computer is safe,” said Trump, who rarely uses email or computers, but tweeting frequently.

According to the sources, President-elect Donald Trump has repeatedly downplayed the accusations made by the US intelligence agencies that Russia tried to influence the presidential elections using the hack. Hence, according to the President-elect Donald Trump, the Russian President Putin is not the real culprit. As it is the computers as which have already complicated our lives very greatly.

As we seen last week, how the President Barack Obama ordered sanctions to Russian intelligence agencies, closed two Russian properties and expelled 35 diplomats whom Barack Obama suspected that conducted surveillance. However, the Russian government has clearly denied the allegations.

But, according to the reliable sources, the President-Elect Donald Trump plans to meet with intelligence officials in the coming days to learn more about the allegations. Moreover, he also said he wants US officials “to be safe because it is a rather serious indictment.”

So, lastly, he recalled this as a failure of US intelligence on the existence of weapons of mass destruction in Iraq before the US invasion. So, what do you think about Donald Trump’s remarks? Simply share your views and thoughts in comment section below.