We all know very well that the growth and use of the so-called voice or virtual assistants that are gradually reaching all our mobile and desktop devices, is spreading rapidly in the devices of most of the manufacturers of these type of products. Now, according to the latest reports, the tech giant Microsoft’s virtual assistant Cortana is now available for iPad users.

The growth and use of the so-called voice assistants that are gradually reaching all our mobile and desktop devices, is spreading rapidly in the devices of most of the manufacturers of these type of products, specifically, I am talking about the tech giant Google, Microsoft, Amazon or Apple, among others.

In this way, each one of the current technological giants has already launched and is improving its proposals in this sense-making use of such important technologies in the near future as artificial intelligence. Well, while the tech giant Microsoft focuses on its Cortana, the tech giant Google in its Assistant or Amazon in Alexa, the tech giant Apple does not stop developing and implementing new improvements for its popular Siri proposal.

However, we must bear in mind that at the same time these firms collaborate with each other when we talk about their hardware and software market since the penetration of their products is not the same in both cases. We say all this because the firm based in Redmond, of course, the tech giant Microsoft whose mobile devices are in danger of extinction, as we have already mentioned in recent months, has to promote the use of its own assistant in the products of the competition, as is the case at hand right now. 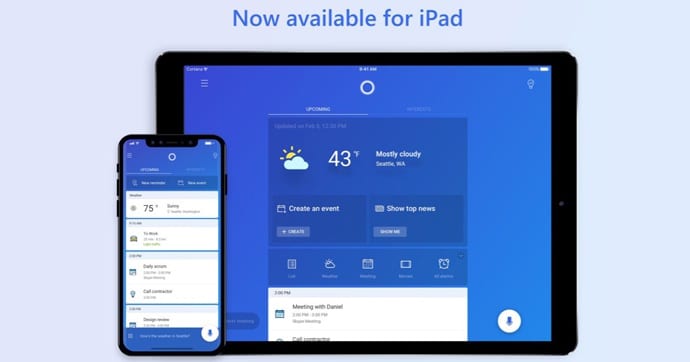 From what we just know, the firm has just made public that its popular assistant software that we usually find in Windows systems, is now available to work correctly and adapted for Apple’s tablets, the iPad. That’s why the Redmond- based firm is now bringing its smart assistant Cortana to iPad devices with iOS.

Microsoft’s Cortana already has a version adapted for iPad

It is worth mentioning that this new support for the iPad, in the beginning, includes a functionality very similar to the one that till to the date we could find in the mobile terminals of the same firm, the iPhone.

However, one of the biggest changes we are going to find is that which refers to the appearance of the assistant as such, since the tech giant Microsoft has adapted its design so that Cortana fits the larger screens of these devices.

On the other hand, the app still looks very much like the adapted version of the iPhone, although of course, in this recent case we will have the possibility of seeing a greater amount of content on the screen thanks to this new improved design. Anyway, this is a project that has been made known to everyone a few hours ago, so it still has a lot to improve.

This is a job that the tech giant Microsoft itself will have to carry out over the coming months, both at the interface level and in terms of Cortana’s internal functionalities on iPads.

How to Reinstall Windows 11 Without Losing Data and Apps