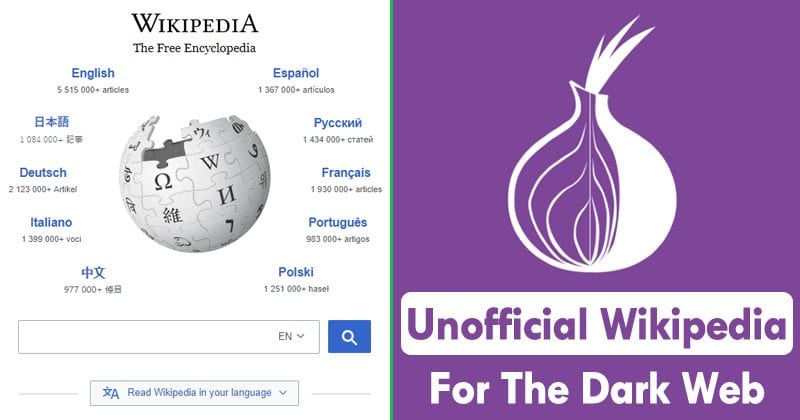 The Internet began to arrive in a massive way to all the homes in the world, one of the main advantages of the Internet is that it is an inexhaustible source of information of all kinds. However, now recently, due to privacy issues, an Ex-Facebook engineer has created an unofficial Wikipedia for the Dark Web.

Ex-Facebook Engineer Creates An Unofficial Wikipedia For The Dark Web

Since the Internet began to arrive in a massive way to all the homes in the world, one of the main advantages that it has been offering is having become an inexhaustible source of information of all kinds, more or less truthful, of course.

At present, one of the most used ways in a good number of countries around the globe when it comes to knowing about almost any subject, in addition to a relatively reliable way, is using Wikipedia, an encyclopedia that nowadays it has become almost a source of essential information. In fact, this is one of the Internet portals that we really do not value in its proper measure until we cannot access it.

That is why, in many parts of the world, the regular use of Wikipedia is something that is taken for granted and that we access continuously, however we must bear in mind that there are also some regions where the use of this encyclopedia Free Internet access is prohibited, as is the case, for example, in countries such as Turkey or Syria, where access to Wikipedia, in addition to being difficult, can even become dangerous.

This is something that for defenders of freedom on the Internet, a hot topic these days, is totally unfeasible, so they try to take action on this, as it has happened in this case. We say this because, to make the use of Wikipedia much safer for users at risk from countries where it is not allowed, the former Facebook security engineer Alec Muffett, has begun to carry out an experimental service in the Dark Web for a Wikipedia that offers visitors various safe protections related to their privacy.

The Tor network will have its own anonymous access to Wikipedia

We must bear in mind that we are talking about a project that at the moment is not official, that is to say, that the Wikipedia that we all know is not at all involved in all this. In this way, the service is accessible through Tor Browser and offers a plus of privacy to our connections around the world to hide our location from anyone trying to track us. It is true that the normal version of Wikipedia is already accessible through Tor, but to get access to it the user has to leave the private network, so the risks of being detected increase considerably.

So Muffett has created what is known as a Tor service for Wikipedia, which means that traffic never leaves the encrypted and secure confines of the private network, keeping us hidden. At the moment this new alternative in Tor is read-only, so for the service to be more useful, it is necessary that Wikipedia itself participate in the project later.