We all know very well that the tech giant Google has a strong commitment to education in its well-known operating system for laptops, of course, I am talking about the Chrome OS where the tech giant Google always seeks to offer hardware solutions at a low price. As recently, a tablet was spotted in the wild which is powered by Chrome OS ahead of official launch.

Meet The First Tablet Which Is Powered By Chrome OS

After approaching the most used mobile operating system, of course, I am talking about the Android, having started to support their applications, Chrome OS may be coming to tablets now.

In the United States, the focus on low-cost devices for education has been increasing. Hence, the tech giant Google has for some time been offering it, equipped with its Chrome OS, having recently seen the tech giant Microsoft enter into this war with its Windows 10S.

Although little known in our country, Chrome OS is a very Cloud-centric operating system that uses the tech giant Google Chrome as its primary browser. Until recently, this system only allowed to install applications from its own store only, however, recently, the tech giant Google opened this system to other applications as well, hence, allowing to also install the apps available in the Android store.

Very focused on education, Chrome OS is the operating system that equips the computers that Google makes available to this market. However, according to an image recently shared by Alister Payne, a participant in the BETT education fair, this system may also be coming very soon to the tablets as well. 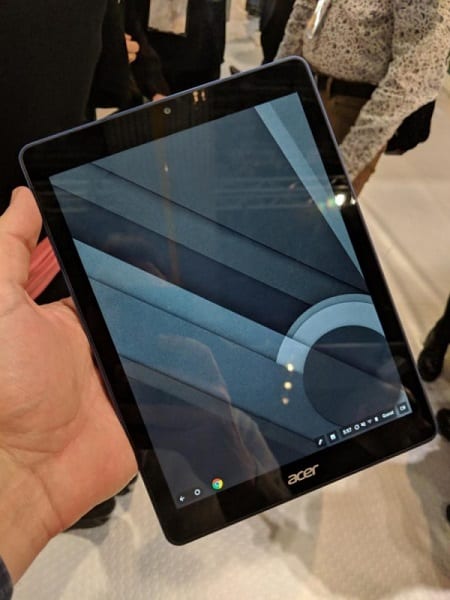 Although the publication was eliminated quickly, in the image it was possible to see an Acer tablet running Chrome OS. This device has not yet been presented by Acer and is likely to be done very briefly. However, at present, its characteristics are not known.

In addition to the computers, the tech giant Google intends to attack the market for education with tablets, most likely also low cost, to allow students to have even closer contact with the potential of technology in education.

So, what do you think about this tablet running Chrome OS? Simply share all your views and thoughts in the comment section below.