We all know that when Microsoft created Surface, the tech giant showed its genius and ability to produce equipment that created a new area in the computer market. However, recently, the full specs and images appeared on the web claiming to be Surface Mini which was actually canceled by the Microsoft.

Microsoft’s new Surface has shown that the software giant is ready for the market and to give a fair response to the competition. However, when the tech giant Microsoft created Surface, Microsoft showed its genius and ability to produce equipment that created a new area in the computer market.

After this the brand tried other configurations and other philosophies, always denying that it did. But after all, as we now know, the Surface Mini was a reality, which never reached the market.

So, we already knew the existence of a futuristic Microsoft Surface Mini that never saw the light as we told earlier, and even we had already shown part of its design in recent leaks.

Now thanks to Evan Blass we have access to new images of this particular tablet in which we can see with more clearly its design and also its interesting range of colors. Of course, to see the tablet on the shelves not, because it is already a project that is part of the past.

The new images of Microsoft’s Surface Mini let us see that its appearance was aimed almost exclusively at students, perhaps the main reason why it never saw the light. The segment of students is the one with the lowest purchasing power and it would be difficult for a product of these characteristics to go out to the market to find the profitability and more knowing that each time we have bigger mobile phones capable of doing the same (and even more) than a tablet.

Among the features of Microsoft’s Surface Mini is its ARM architecture that made it compatible with the unsuccessful Windows RT initiative. It would also include S Pen, USB ports, headphone jack and front camera for video calls. As we said, its sale would be directed towards young people with what would bet with launch under colors blue, red and black. 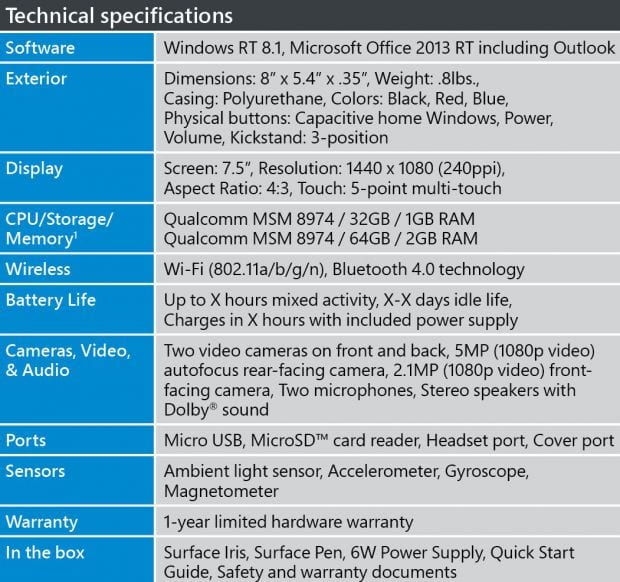 Other specifications of the Microsoft Surface Mini are its 7.5-inch screen, a resolution of 1440×1080, a processor Snapdragon 8974 and configurations selling 1Gb of RAM/32Gb of storage and 2GB of RAM/64Gb of storage. The project seems to be totally canceled and we will never see it on the street.

So, what do you think about this Microsoft Surface Mini? Simply share your views and thoughts in the comment section below.