A new rumor coming from one of the reliable sources, suggests that the upcoming Galaxy S8 is expected to feature something really interesting that Microsoft added to its Windows recently.

Well, we are all aware of Samsung Galaxy Note 7 issue. Note 7 is exploding due to some serious problems in the factory battery anode and cathode cell contact. We have also seen Samsungs throwing up extra $100 to encourage people to turn in Samsung phones.

However, Samsung’s next flagship handset will be Samsung Galaxy S8, and it is expected to feature a major redesign. The smartphone will lack physical home button and will have dual-lens rear camera setup just like iPhone 7 plus.

As we saw earlier that how a new rumor coming from one of the China’s popular leakster, Ice Universe, suggests that the upcoming Galaxy S8 is expected to feature 8GB RAM and a newer UFS 2.1 flash storage chip. The same leakster also suggested that Samsung is going to manufacture their own 8GB RAM memory using its 10nm technology as pear a report by MySmartPrice.

Now again a new Galaxy S8 rumor arising on a Windows blog where Steve Litchfield of all about Windows Phone got his hands on a possible indication of a very intriguing new feature that may be coming to Samsung’s Galaxy S8.

However, the new feature which was already in question shows something really interesting that the tech giant Microsoft added to its Windows recently. Continuum, it is a feature that allows a Windows phone to connect to a dock which simply allows Windows phone users to power a desktop experience. 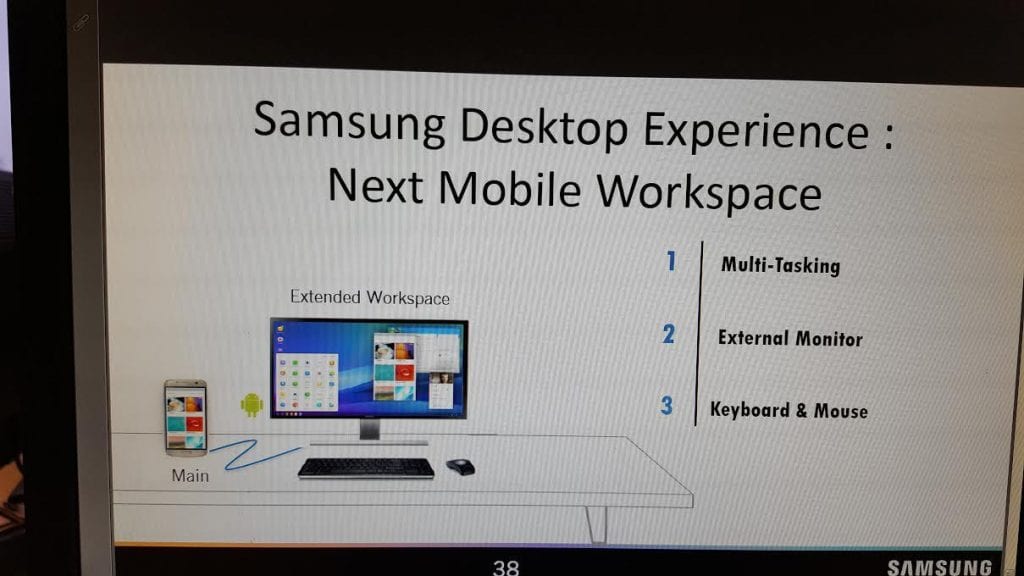 Here is we found a leaked slide or image that was published by the “All About Windows Phone,” which was reportedly taken from an internal Samsung presentation that focuses on the upcoming flagship the Galaxy S8.

Moreover, if the South Korean Giant integrate the feature like this, then all the Samsung Galaxy S8 owners would be able to carry a single Smartphone which could work as a smartphone as well as a desktop. However, to get confirmed about this new feature we have the only option to wait.