Samsung’s flagship smartphone S8 is a big hit in terms of revenue and shipments for the company. Now, the Korean giant Samsung will soon introduce foldable smartphones and not only that even the alleged Galaxy X gets WiFi certification as well.

It is also discussed that a prototype of this phone is circulating among various partners interested in financing this technology, and one of these prototypes would have been discovered after its passage in the certification of the WiFi Alliance.

A new unknown Samsung phone has just passed certification in the WiFi Alliance with model number SM-G888N0, where ‘N0’ refers to its being put up for sale only for the South Korean market. What is most surprising is that we talk about a phone that, according to said certification, has installed Android 6.0 Marshmallow, an old operating system, something that would not make sense for a new phone of this firm.

This is why it is speculated that we are talking about a prototype phone, something that would only make sense if it is a device other than the rest and that will offer a series of novel features that require significant testing to launch a Prototype and certify it.

There are sources that associate this phone with the codename Haechi, an Asian mythological beast with unicorn body and lion’s head that comes to say that nature can take different forms, something that seems linked to the flexible phone of Samsung. 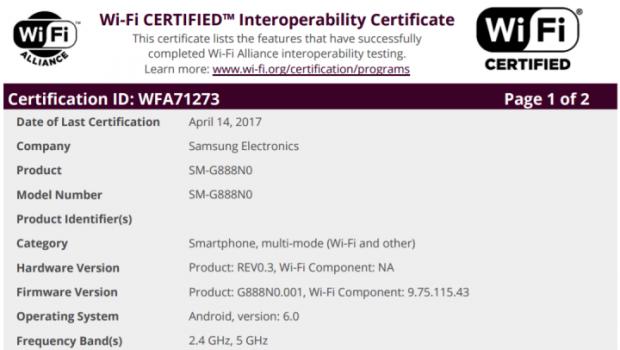 While everyone is waiting for Samsung to say something about its Galaxy X, other sources point out that this model that has passed certification would be a Galaxy S8 exclusive to the South Korean market or even a Sports version of the new top of the range of the firm. However, sooner or later information will come out about Samsung’s long-awaited flexible phone.

So, what do you think about this new mysterious device? Simply share your views and thoughts in the comment section below.