Little by little the tech giant Google’s Artificial Intelligence learning new things, as it do all tasks completely without humans. Like it already knows how to play table games and some online video games, and now it wants to go directly to complete the most popular encyclopedia in the world: Wikipedia.

The tech giant Google’s AI already knows how to write articles in Wikipedia, although it does not do it completely autonomously. The method is as follows: take the first ten pages that appear on Google on a specific topic, process them based on the machine learning and then write what it thinks is important.

The Wikipedia entries generated by Artificial Intelligence are not even comparable to those written by people of flesh and blood, but at least they are legible. It is clear that the Google AI is still at an early stage of its development, although the fact that with very little it has been able to assimilate thousands of words in a matter of minutes gives us an idea of where it can go with a short interval of time.

Unlike humans, who need years of study in a subject to generate content about it, Artificial Intelligence could – not yet, but may someday yes – study and generate material in a matter of minutes on topics that are incomprehensible for a human.

This perhaps implies that certain jobs are in immediate danger of disappearing, and would not be the first ones threatened by robotization, which will go beyond merely manual or low-skilled jobs.

The limitations of this technology are currently more than evident: it can only generate information from existing information. It will not able to create original Wikipedia entries, but it processes text that already exists and condenses it into a page as brief as possible about a person or topic.

Below we attach an image comparing the Wikipedia entry made by the Google AI (left) with the one created by collaborators of this online encyclopedia. It’s from The Register, but as you can see, at least DeepMind knows how to express itself with complex sentences, even though it makes many mistakes. 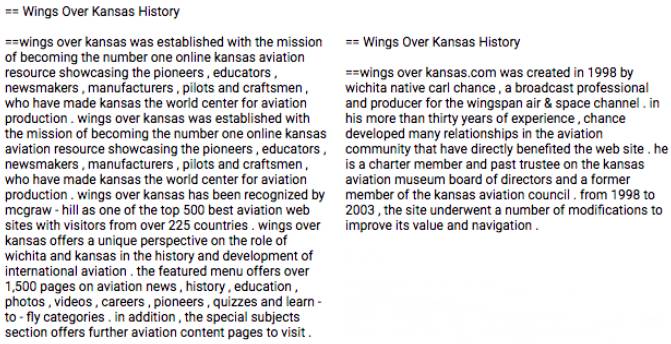 These entries have not been published as they are a mere test of the ability of Google software or AI (Artificial Intelligence).