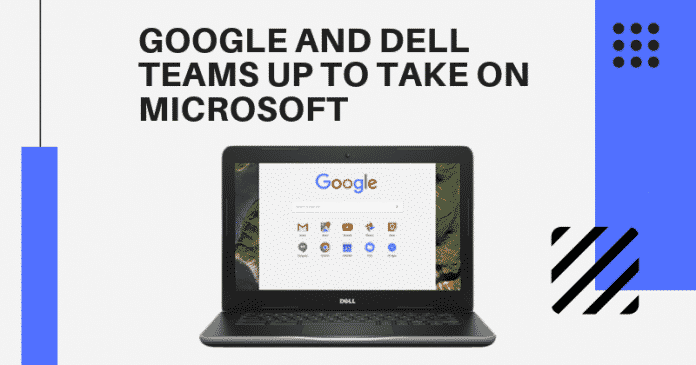 Google is all set to launch the new Chromebook enterprise to drive more sales away from the laptops that run on windows. We all are pretty much aware of the fact that Microsoft is dominating the computer enterprises for years, but it also has a lot of competitors such as Linux, Apple, and Google.

Recently, it has been revealed that Google is collaborating with one of the most prominent and long-time partner of Microsoft, Dell. This partnership between Google and dell would help to push the Chromebook enterprise laptops in the Computer market.

Another report says that Dell is launching the Chrome operating system on a business-oriented latitude laptop which offers a regular clamshell design along with a 2-in-1 option.
Dell and Google have been working together for more than a year to shape the new Chromebook enterprise devices in such a way that it meets every possible requirement of the IT sector.

A wide range of Dell’s cloud-based support services would be provided in the Chromebook that gives better control to the admin upon how these Chromebooks are working out inside the businesses.

This also gives IT admins to integrate Chromebooks into there previous Windows ecosystem and easily manage them via tools like VMware and Workspace One. Over the years, Microsoft and its collaborators have offered a wide range of administrative tools making customization and control an easy job for the admins.

Google has also worked on the Chrome admin console to improvise the loading time, add search on every page, and UI tweaks with material design.

Even though dell has announced the 10th Gen processors, putting up the 8th Gen processor in the latitude series might disappoint those who love to stay updated on new technology. To cover this up, both of the laptops will offer LTE options and USB type C docking.

As per the sources, Google is collaborating with a lot of OEMs to target enterprise users. Dell is the first OEM to announce the Chromebook enterprise laptops, but as per John Solomon, Vice president of Chrome OS, the collaboration is not exclusive with Dell. This clearly states that Google is all set up to work with other computer giants like Lenovo, HP, and Asus.