Google unveiled a new Pixel tablet at the Google I/O 2022 Event. Though, this isn’t the first Pixel tablet. In 2018, Pixel Slate with Chrome OS was introduced, but it is now discontinued.

The Pixel Slate wasn’t hit, as there was a cheaper option available in Chromebooks. So, now, it will be interesting to see if this Pixel tablet goes well or not.

As per the reports, the Pixel Tablet doesn’t look very premium. However, the Pixel tablet is not coming until 2023, so we need to wait till its launch. 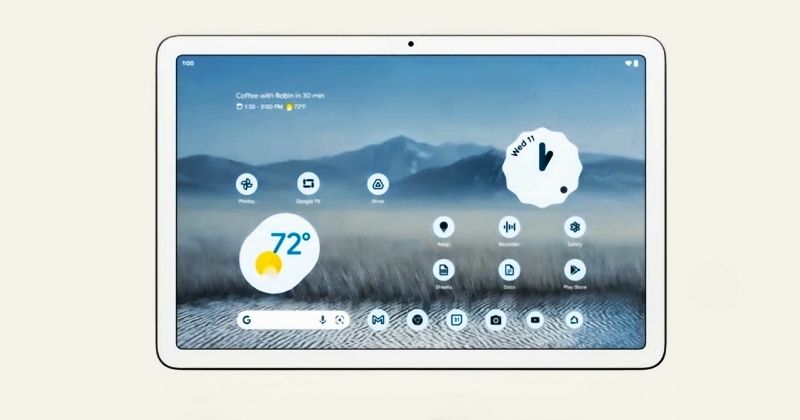 According to Rick Osterloh, the company’s plan for this Pixel tablet is to “be the perfect companion to your Pixel Phone.” Like the phones, we can expect the Tablet to run on the Google Tensor chip.

The company also announced that a few Android OS updates for tablets would optimize experiences for larger screens. They might be focusing on tablets to reduce Android on larger foldable phones.

At the I/O event, Google only teased the Pixel tablet and did not give any details on pricing. This isn’t surprising, as there is still one year for the tablet to be launched.

Here’s a sneak peek at our upcoming Pixel tablet 👀

A teaser shows a close look at the hardware of the device. There are four pins below the Google G logo. This hints that the next “Nest Hub” product might be a tablet that can be docked into a smart speaker base. These pins might be the charging mechanism, and the side-mounted USB-C port is also visible.

The renders of the tablet looks a bit like an intelligent Hub Nest display, with a thick and white bezel. On the rear side, there is a circular camera; the design is similar to Pixel 3 and Pixel Slate. There is no camera flash, suggesting a reliance on Night Sight.

According to the renders, Pixel Tablet might have at least two color options available, including off-white and greenish-gray.