Google’s upcoming smartphone, Pixel 6A, has been leaked by a well-known tipster. The leaked details show the design of the device and a few specifications as well.

The Google Pixel 6A is a budget-friendly Pixel A-series lineup that looks similar to the Pixel 6. It might have the same black camera strip on the rear side with two cameras and a flash. On the front side, there’s a punch-hole selfie camera.

A leaker Steve Hemmerstoffe (@OnLeaks), has shared the details of the upcoming device Google Pixel 6A.

Google Pixel 6A Smartphone will Not Have a Headphone Jack 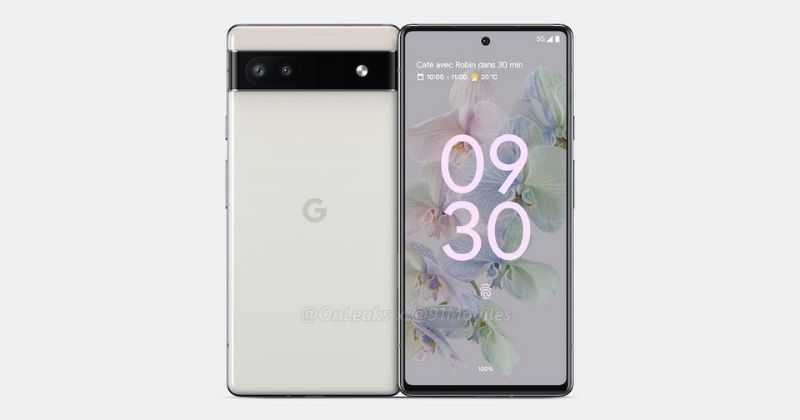 According to the leaked renders, there is no fingerprint sensor on the outside of the device; it might be placed under the screen similar to Pixel 6 and Pixel 6 Pro.

Most probably, Pixel 6A will have the same design as Pixel 6 and Pixel 6 Pro. This means the upcoming smartphone will come with the same camera band and camera lenses. On the Pixel 6A, there will be a glass back and a dual-tone finish.

The renders show Pixel 6A to have a punch-hole cutout at the center on the top of the display. It will have a 6.2-inch diagonally display with OLED resolution and an in-display fingerprint sensor.

On the backside, there are two cameras, an LED flash module with a Google logo in the center. Unfortunately, Google is dropping the 3.5mm audio jack on the upcoming Pixel 6A device.

At the right side of Pixel 6A, there is a power button placed right above the volume buttons. At the bottom, there’s a USB Type-C port in the middle of the two grilles, from which one is for the speaker and the other one is for the microphone. On the left edge of the phone, there is a slot for SIM cards.

Not many details are shared about the internal hardware of the device. As the Pixel 6A will be similar to Pixel 6 & 6 Pro, we can expect a mid-range SoC, a less premium design, and might have a low price tag.

There is no exact date revealed on when will the Pixel 6A release. However, the Pixel 6 and Pixel 6 Pro were launched last month only, so we need to wait for a while for this device.