We all know that how Android has evolved significantly in recent years. Hence, Google rolls out an awesome feature for your Android devices.

Google Rolls Out An Awesome Feature For Your Android Devices

Google’s mobile operating system has evolved significantly in recent years. With the release of Android 7.0, which is not yet present in 1% of devices, the tech giant Google innovated in some features and work continues on new versions in order to improve the system.

Now the tech giant Google has released a new feature called Instant Tethering, which allows the connection between Android devices, something like the one that exists for iOS.

Android does not need third-party applications to turn a device into an authentic hotspot. However creating a hotspot on Android means that the user has to configure it, setting a few parameters and can activate it manually. What if the process was all automatic and smart like on iOS? This is where the new Android function Instant Tethering comes in. 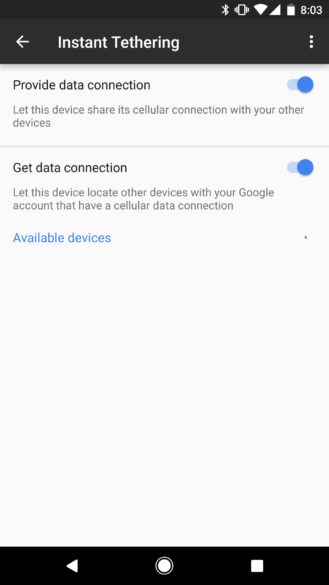 Instant Tethering is a new Android feature that allows any device with Google account to share its connection with other devices. This feature is available with Google Play Services 10.2, which is already being distributed on some Nexus and Pixel smartphones.

For now, this seems to be a unique feature to connect Android devices. This new feature is very similar to what already exists in the Apple world where, for example, an iPhone can function as a router connecting to the Internet via Bluetooth without having to turn on the hotspot. Everything happens in a transparent way to the end user, as long as the Bluetooth is active.