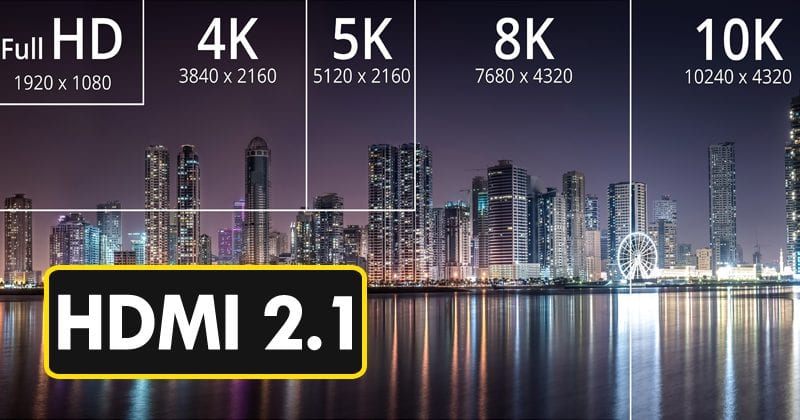 In the midst of smartphones, laptops and other gadgets announced earlier this year during CES 2017 was the HDMI 2.1. The new standard ended up being finalized this week and, as expected, supports features such as 10K resolution and dynamic HDR.

In the midst of smartphones, laptops and so many other gadgets announced earlier this year during CES 2017 was the HDMI 2.1. At the time, the specifications still needed to be adjusted. The new standard ended up being finalized this week and, as expected, supports features such as 10K resolution and dynamic HDR.

The HDMI Forum, the group responsible for technology, tried to match the new specifications with the previous ones. This means that HDMI 2.1 uses the same connection pattern as we already know and, except for one exception, works with devices based on earlier versions of HDMI. Obviously, all new features can only be availed on HDMI 2.1 compatible devices.

On the outside nothing changes, but on the inside, the difference from HDMI 2.0 is enormous: while it has a bandwidth of 18 Gb/s (gigabits per second), HDMI 2.1 offers 48 Gb/s. Thanks to this, the new standard can support various combinations of transmissions, including 4K resolution with 120 Hz frequency and 8K with 60 Hz.

Most surprising is the 10K resolution support (10240 × 4320 pixels). We do not have content in that resolution – indeed, even the 4K video offering is still low – but that’s one way of showing the potential of the technology, leaving it poised for the future and eventually serving very specific applications.

Another important attribute is support for dynamic HDR, which basically allows the HDR to be adjusted frame by frame. In this sense, VVR (Variable Refresh Rate) is also supported, a standard that adjusts the refresh rate at each moment, but without affecting the fluidity of a game, for example.

Other features highlighted by the HDMI Forum support for QFT (Quick Frame Transport) and ALLM (Auto Low Latency Mode) standards: the first decrease latency in games and virtual reality applications; the second automatically adjusts the latency for each application.

Highlight also for QMS (Quick Media Switching) support, which reduces the time that black or white screen appears before content is displayed, and eARC, which makes HDMI 2.1 compatible with newer audio standards, like Dolby Atmos and DTS: X.

Although specifications have been finalized, it may take months for the first compatible devices to hit the market. However, if you want to enjoy the full potential of the new version, you will have to use a 48G HDMI cable that will certainly be anything but cheap.