Although HTC has distanced the smartphone sector, its return is a reality and will release new devices during this 2017. Hence, recently alleged HTC Vive smartphone leaked via promotional video.

Although HTC has distanced the smartphone sector, its return is a reality and will release new devices during this 2017. On 22 November, it presented the HTC 10 Evo, and now on January 12th there will be an event in which it is expected that the company would announce the HTC U Plus, better known as HTC Ocean Note, a few days ago an ad that reveals its imminent arrival leaked.

One of the sectors in which the Taiwanese firm has highlighted is undoubtedly that of the virtual reality. Its line HTC Vive came to meet face to face against the popular Oculus Rift. While Oculus has lowered the minimum requirements for PC, while HTC still requires powerful computers. The bet of the company for this technology is growing stronger, proof of this is the recent opening of a virtual store dedicated to HTC Vive.

Thanks to the image published by the famous infiltrator @evleaks, we have learned of the existence of a phone with the brand HTC that lives in its back deck. It is a device that was still unknown and whose logo indicates that it would be based on the virtual reality technology of the Taiwanese firm. 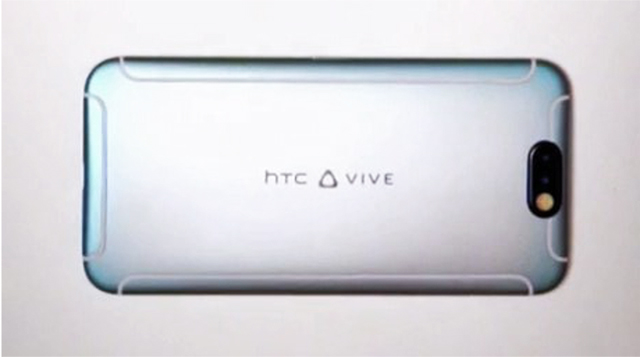 The company has not announced anything about the phone, but the filtered image makes us think that could be a device that can function as a control for virtual reality glasses HTC Vive. It is also possible that the firm has in its roadmap to release a “lite” version of its powerful viewer that could accompany this device.

It is not crazy because it is clear that the capacity required by Vive technology is still not feasible for a smartphone. So it may be that HTC opts for a portable case to compete against Samsung Gear VR in collaboration with Oculus, or VR DayDream of Google. In this way, It would easily enter the market of virtual reality for all budgets.

On the other hand, we are waiting for the arrival of the HTC Vive 2, the second generation of glasses that could integrate two 4K screens and a refresh rate that would rise to 120 Hz. It will arrive without cables, as the data transmission would be made wirelessly to provide a greater sense of freedom of movement.

In the video shows how Taiwan’s strong commitment to providing devices with multiple options for customization. However, with this proposal, HTC opens a wide range of possibilities that will allow you to customize the phones to the maximum extent.

In this way, the company makes it possible to have a multitude of different models and that each one is unique according to the taste of its owner. It’s not just about choosing color or patterns, but also come into play textures through different materials. In any case, it is a matter of waiting for the next event simply to know more details of the new of HTC for the year 2017.