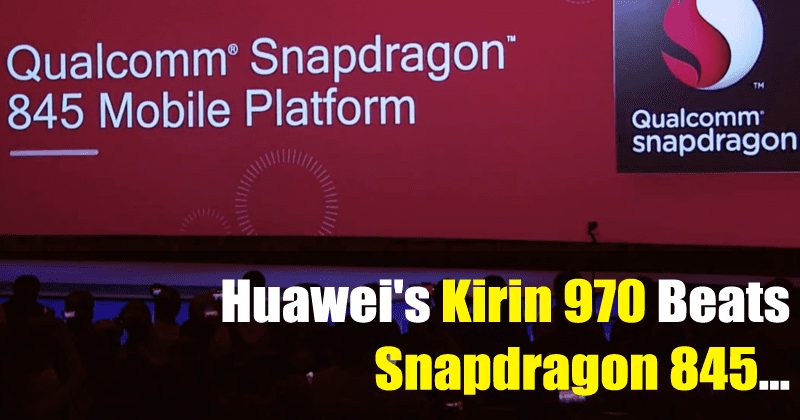 The well-known Chinese smartphone manufacturer Huawei put the cards on the table with its Kirin 970 which implements an NPU capable of learning with our behaviour. Instead, Qualcomm has not released its new Snapdragon as such but new benchmark suggests that the Kirin 970 is more powerful than the Snapdragon 845.

Contents show
Kirin 970 more powerful than the Snapdragon 845
So which one is better?

When devices with Qualcomm Snapdragon 835 processors have not yet arrived, the company has already started working on its next model: the Snapdragon 845. Several reports indicate that Qualcomm has already begun development of its next SoC, which is expected to be manufactured 7nm and that possibly joins the high-end 2019.

Earlier, according to the information published in GizChina, TSMC would have started the process of 7nm in April, and they would already be testing with the first prototypes of the Qualcomm Snapdragon 845.

Its launch would be planned for early 2019, which fits us perfectly since it would come from the hand of the Samsung Galaxy S9 or the Xiaomi Mi 7, as it has already happened this year. However, if we notice then it is clear that Snapdragon 845 processors will be way smaller than 10nm processors, so, we can expect that both devices (Galaxy S9 and Mi 7) will be much thinner.

The world of processors is really close in recent years. the well-known Chinese smartphone manufacturer Huawei put the cards on the table with its Kirin 970 which implements an NPU capable of learning with our behaviour. Instead, Qualcomm has not released its new Snapdragon as such but new benchmark suggests that the Kirin 970 is more powerful than the Snapdragon 845.

It is a pretty striking news although these data we have to take them with tweezers for the reasons that I will expose you next. In addition, it is a benchmark somewhat different from the ones we usually know. Do you want to know all the differences and why the Kirin 970 is more powerful?

Kirin 970 more powerful than the Snapdragon 845

First of all, you must know that we are talking about a new test that has come to light on Weibo. The information is true and although it is possible that it is false we do not believe it like that from an objective point of view. In addition, this test is synthetic, as it measures only the processor as such without taking into account the performance in actual use. It does not take into account the processing for example, but the results are obtained through other means that only involve the processor as such.

According to the previous information and a new filtration of the power of the Snapdragon 845 seems to be a bit short. The Kirin 970 from the hand of Huawei is able to get a higher score without going any further. The difference is just 7 percent and is not obvious on a daily basis but it is striking. What do you think?

So which one is better?

Each has its advantages and disadvantages. The Kirin 970 has artificial intelligence and power to spare. Against it, we can say that the source code is difficult to be released so the development of these phones is almost nil. The Snapdragon 845 will have more support from the community and may also process the images collected by the camera in a better way.

There is no clear winner, the only thing that is certain is that if you acquire the mobile and if it brings some of these SoCs then it is a very good purchase. Neither of you is left behind in any way, so it’s up to you to value what you want on your next mobile.

So, what do you think about this result? Simply share all your views and thoughts in the comment section below.