The arrival of iOS 11 came to show that the tech giant Apple is evolving and improving its operating system. There are many new features that everyone can already use.

But the early days of iOS showed a reality that few wanted to face. The iPhone battery is running out much faster than normal on this new version of iOS.

It’s not unusual for early versions of the new iOS to have battery issues, especially on older models. The tech giant Apple tends to resolve this problem in later updates and this time seems to have to be needed again.

Does iOS 11 have a battery consumption problem?

Wandera has evaluated more than 50,000 iPhones and iPads from users with very intensive usage profiles and found that everyone who upgraded to the new iOS 11 was consuming twice the speed of the previous version’s iOS 10.

Data collected shows that an iOS 10 device takes 240 minutes to pass 100% to 0%. In the case of iOS 11, these numbers are much lower, taking only 96 minutes to reach zero. The difference is high and around 60% loss of battery capacity for the new iOS. 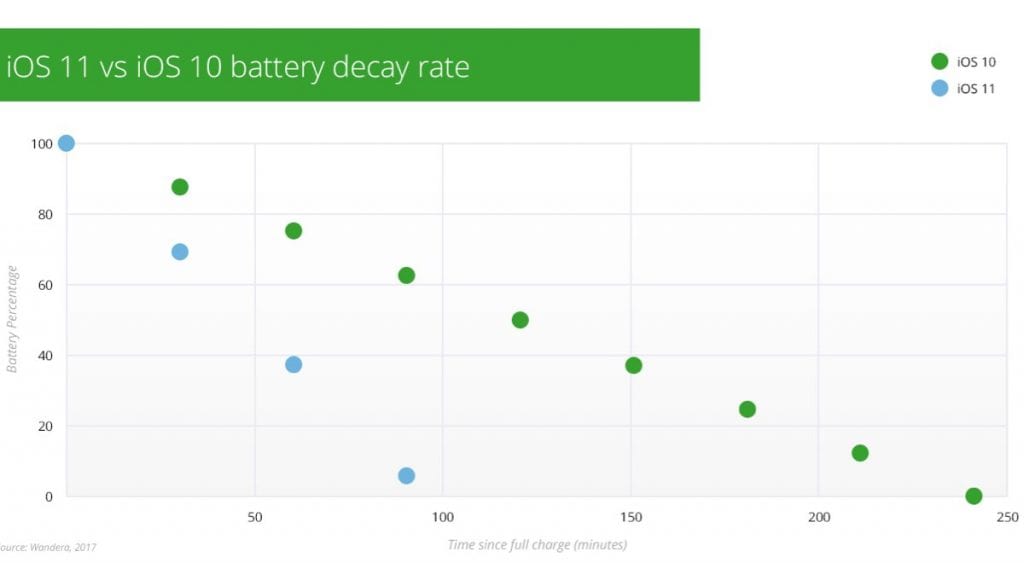 Possible causes for this battery problem on iOS 11

Wandera did not point directly to this problem but raised three possible scenarios. The first is in the normal reindexing that Spotlight does after the upgrade. There is also the possibility of being willing to test all these new features that the iOS 11 offers that is causing this abnormal battery consumption.

Another possibility is in the innovations implemented. The Animoji and Face Recognition that the Face ID of the iPhone X will bring are based on an intensive use of the camera, an element that is known to be responsible for high battery consumption. The hardware that is on the Bionic A11 processor may be responsible.

In the coming days, with the return of normal use, these values should be reevaluated and, if necessary, the tech giant Apple will address this problem by launching an update to correct the abnormal consumption, especially in older devices.