Samsung Users Are Happy With Their Phones Than iPhone Users

Everyone knows Consumer Reports as being a trustworthy and exempt source when it comes to recommending purchases from American consumers. Already on several occasions, it was beaten against the giants of the industry, leading them to improve their products.

In the latest analysis of smartphones in the market, Consumer Reports gives a preference over the Samsung Galaxy S7 and not the tech giant Apple’s iPhone 8.

After reviewing existing smartphone market proposals, Consumer Reports has established a list of recommended devices in order of preference based on various factors of daily use.

Despite these similar notes, the Consumer Reports recommendation ends up falling for Samsung’s product and not on Apple’s new smartphone, of course, the iPhone 8.

However, now with so much information circulating nowadays on the Internet, one can easily “study” everything. One of the latest polls puts the satisfaction of users who have iPhone and those with Samsung Galaxy side by side. According to the results, users who own Samsung Galaxy smartphones are more satisfied than those with iPhone.

According to a study, which was based on the reactions of users on Twitter, iPhone users are less satisfied than those who have Samsung Galaxy smartphones. The study, conducted by LikeFolio, evaluated the trends and level of satisfaction of the two smartphone models, since 2016, in the social network.

As you can see in the following chart, overall the satisfaction of users with Samsung Galaxy smartphones is always superior to those who have iPhone. 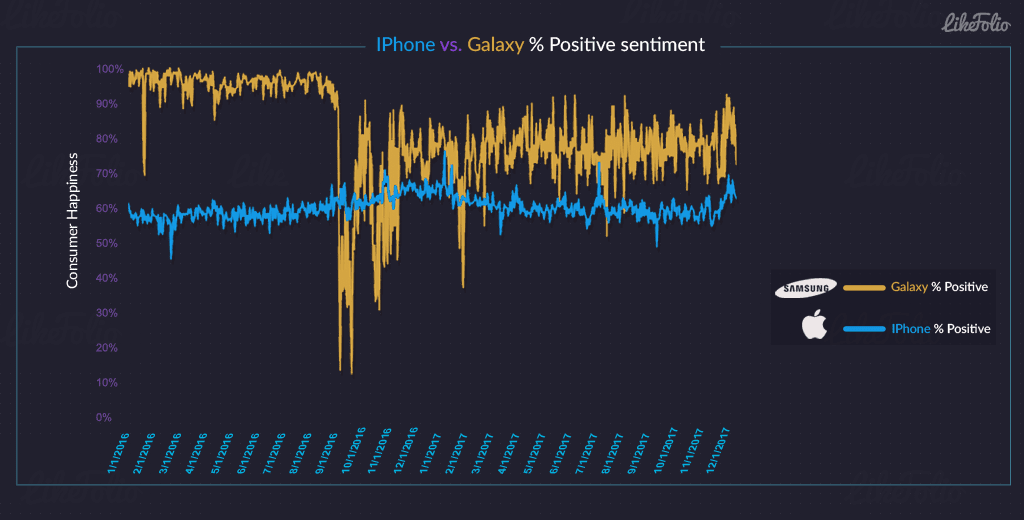 The graph shows, however, a huge break with regard to user satisfaction with Samsung Galaxy smartphones. It all happened in the autumn of 2016 when the popular problems with the Samsung Note 7 appeared. Although the level of user satisfaction with iPhone was very consistent, around 60% -70%, Samsung recovered and managed to surpass the equipment produced by itself as compared to the company of Cupertino.

After the little demand for iPhone 8 and iPhone 8 plus, iPhone X appears as a “saviour” of Apple’s revenue given the strong demand. The iPhone X is one of the most coveted smartphones in the market although Consumer Reports considers it worse than the Galaxy S8 and the iPhone 8. According to the report, the non-profit organization says that the iPhone X is an innovative device that has a fantastic display just like the cameras. However, the tech giant Apple’s equipment also has some defects, such as durability and autonomy.

Overall, Samsung’s tweets are clearly more positive than those on iPhones, and by the trend, we’re seeing, the iPhone X may not be enough to give Apple the lead in this field.

So, what do you think about this report? Simply share all your views and thoughts in the comment section below.