This is the conclusion we are reaching some analysts after studying the sales figures of the star device of the tech giant Apple, they claim that the rate of migration from Android to iOS has increased substantially since the iPhone X was put on sale for all the world.

Certainly, for many experts on the subject, the iPhone X is selling below the initial expectations of the signing of the tech giant Apple, however, it seems that the model of the tenth anniversary of the iPhone, is being sold in an important way in a market as fantastic as is Chinese.

In fact, as far as we have been able to know, in this region the high-end terminal of the Cupertino firm, is succeeding in convincing more Android users to change “side” and move to the tech giant Apple ecosystem.

This data has been provided by Morgan Stanley analysts, who argue that the adoption of the iPhone X, which is the star device of the tech giant Apple is better than the iPhone 8 and iPhone 8 Plus, although that is not surprising at all, especially considering that sales of these two first models have been seriously affected after the arrival of the anniversary model. 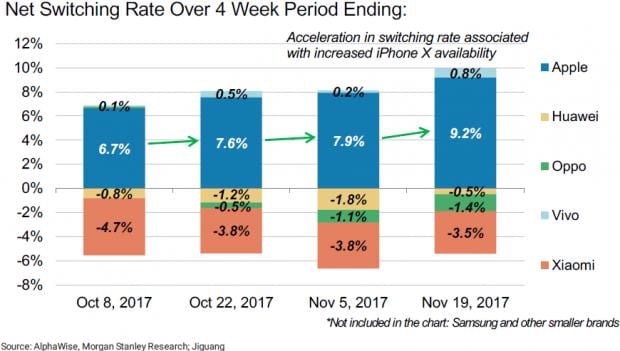 However, perhaps the most important thing, in this case, is that the analyst Katy Huberty affirms that the migration rate from Android to iOS has increased from 6.7% in October, to 9.2% after the arrival of the iPhone X. This is probably the result of features such as the Face ID, the Animoji or the OLED screen built into this device.

The iPhone X manages to increase migrations from Android

Other additional data shows that the adoption of the iPhone X in China is being faster than that of the iPhone 8 and iPhone 8 Plus, especially among owners with terminals with more than 2 years. They also say that approximately half of the tech giant Apple users in China who have bought the iPhone X, have updated it from the iPhone 7 and iPhone 7 Plus. That is why iOS is in clear increase in the Asian country, an area where till to the date, the arrival of the tech giant Apple’s terminals have been more complicated.

The only point against is that the initial sales of the iPhone X have been severely affected by the limited supply, so the tech giant Apple is now in the process of matching the production with the demand for its star phone.

So, what do you think about this? SImply share all your views and thoughts in the comment section below.