We all know very well that the OnePlus 6 is one of the biggest sales successes in the history of the Chinese brand, much due to the quality and the price ratio it offers. However, now according to the latest reports, a well-known French company is selling OnePlus 6 limited edition which cost over $3000 and it really looks stunning.

Contents show
OMG! This Limited Edition OnePlus 6 Costs Over $3000
This OnePlus 6 is not made for everyone
But, what about its price?
What is special about it?

The OnePlus 6 is one of the biggest sales successes in the history of the Chinese brand, much due to the quality and the price ratio it offers.

As usual, the well-known Chinese smartphone manufacturers OnePlus is already preparing its successor, and the OnePlus 6T should arrive in October with a slight increase in price.

The well-known Chinese smartphone manufacturers OnePlus has struggled in recent years to win its position in the market. If the start was very promising, the course was made with ups and downs, however with great success in the latest releases.

After a major success on OnePlus 5 and OnePlus 5T, the well-known Chinese smartphone manufacturers recently introduced OnePlus 6 which has beaten the company’s sales records and captured the market’s attention, both for its price and the features it offers.

As usual, the Chinese brand will launch this year a new version of its flagship, of course, as we told earlier, its OnePlus 6T, which will bring some new features and improvements to the current model.

Moreover, the latest rumors also indicating that the new OnePlus 6T, of course, the upgraded version of the OnePlus 6 that is still to come, would come from the hand of T-Mobile, becomes stronger with confirmation from various sources.

The alliance does not imply exclusivity since the brand will also offer its next upcoming flagship smartphone, of course, I am talking about the OnePlus 6T in its standard global version, although this will possibly imply a higher price.

Smartphones do not have as much time between us as we could think, but there is no doubt that they have become an essential tool. Some years ago, mobile phones were used to only make calls and messages, but nowadays it seems that there is nothing we can not do with them.

We have reached a point where some devices have become authentic fashion accessories. We weigh or not, for many people can change the image of a person if it is a Moto G5 or an iPhone X.

The thing goes even further, and there are limited editions of certain smartphones, decorated with all kinds of precious stones and other materials like gold. This time we have found one of these versions, OnePlus 6.

This OnePlus 6 is not made for everyone

We can find this OnePlus 6 on the website of Hadoro, a firm specializing in modified smartphones and luxury accessories.

But, what about its price?

Yes, now if we talk about the price of this limited edition OnePlus 6 then let me clarify that you can take it home for the decent amount of 2,700 euros, which is about $3,160 (Rs.2 lakh only).

What is special about it?

The internal components of the smartphone are exactly the same but have been built with materials available to very few. It is manufactured in what Hadoro calls “Aero Damascus Carbon“, a material that has been formed by superimposing aeronautical carbon and aluminum layers on top of each other, in total, 36 layers. 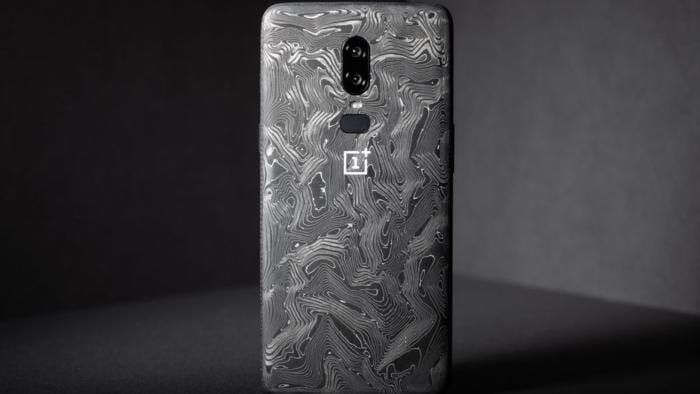 In addition, it has an original design, you will not find anywhere else a OnePlus with a rear as well. The French company also has other “Custom Phones“. On its website, you can buy from a Samsung Galaxy S9+ for 3,600 euros (4,200 dollars), up to an iPhone X for 4,500 euros (almost 5,300 dollars).

We have no idea who will buy a OnePlus 6 of this type, but as you know, there are people for everything. If we have enough money, why not spend it on a $3,160 smartphone.