According to the recent rumors, the founder and CEO of the social media giant Facebook, Mark Zuckerberg could be considering a run for president.

In recent weeks, there is a rumor that is taking over all the offices in Silicon Valley and the United States press. This rumor is the possibility that Mark Zuckerberg, CEO of Facebook and one of the richest people in the world, is presented to the president of the North American country.

There are several indications that this possibility may become a reality in the coming years. Earlier this year, Zuckerberg unveiled its purpose to 2017. In 2015, to read a book every week, in 2016 to create their own virtual butler and in 2017, proposed visit to 50 states that make up the country.

Zuckerberg’s intention is to listen to the testimony of people to whom technology has made life more difficult. However, after this good intention, some media have seen something more. Zuckerberg started by travel can be interpreted as part of a pre-campaign.

The first state he has visited is Texas. In shared photos on their Facebook profile, we can see various pictures that make us suspicious about the true purpose of Zuckerberg to become a candidate for president of the United States in the future.

After the triumph of Donald Trump in the last elections in the United States, Facebook CEO was quick to clarify that the social network had nothing to do with the victory of controversial Republican leader. In addition, Zuckerberg shared a text full of optimism in his Facebook wall, with the intention to encourage US citizens opposed to speech Trump.

Since that time, several decisions have fueled the rumor, Zuckerberg. Vanity Fair magazine has compiled these clues that might give many clues about their future intentions. 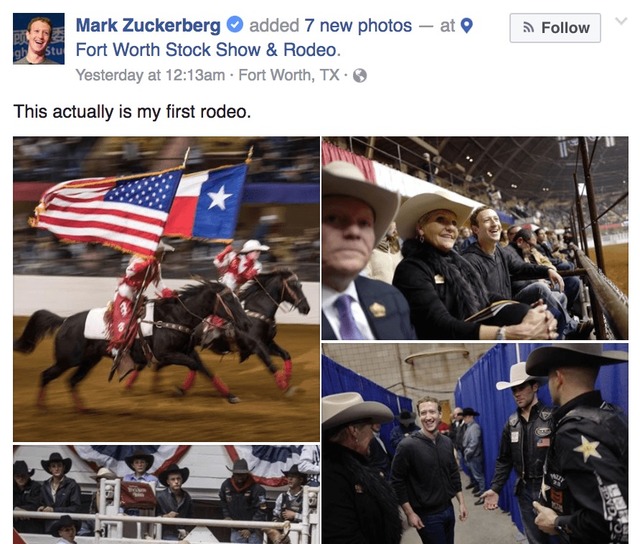 First, the report that Facebook sent to the Securities and Exchange Commission (SEC), in which he explained what would happen if shares quoted Zuckerberg decided to drink a voluntary low for a position in government.

Another sign is the change of address of the director of Facebook about his religious position. Zuckerberg has always an avowed atheist, but in a recent statement, he has pointed out that religion is very important.

In his meeting with Trump, different technological leaders in the country, he was not the leader of Facebook. Sheryl Sandberg was in her seat.

The latest evidence compiled by the magazine has to do with David Plouffe, former Obama campaign manager who currently works at the foundation that Zuckerberg runs with his wife.

At Vanity Fair, they also point out that this rumor is gaining a lot of strength in Silicon Valley. This possibility could occur in the upcoming US elections. Zuckerberg in 2020 will be 36, one year more than necessary to be President of the United States. Although the circle near Mark points to 2024 as a possible date.

For now, these rumors are just that, rumors. Since Facebook have not spoken about this issue and Mark Zuckerberg has not made any statement or official announcement about it. Over the next four years, we will see if these speculations were well designed and CEO of the most used social network in the world, decides to run as a candidate for the White House.