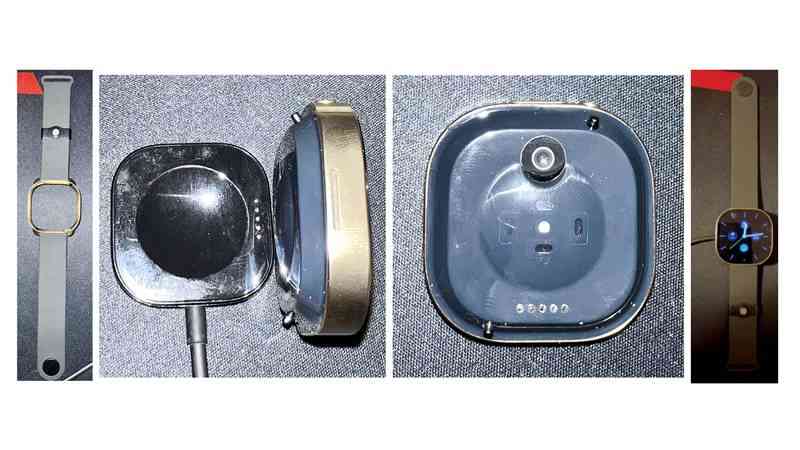 As an earlier rumor indicated, Meta has been working on the Smartwatch, whose images also recently leaked on the Ray-Ban stories smart glasses app.

But now its Dual camera functionality has been leaked online, and at the same time, reliable sources stated Meta had dropped its development for now. Let’s delve into its details.

Meta CEO Mark Zuckerberg changed many of its business names to match this company, such as Oculus Quest to Meta Quest, and also seems to plan a smartwatch with Meta branding.

According to information from Bloomberg, Meta company is now dropping the development of its long-time rumored Smartwatch, which has so far upgraded features than market leaders.

Its rumor & leak image decode says the Smartwatch has a notch, a square but rounded edge, and a dual camera. It will have a 5-megapixel front-face and 12-megapixel back-end camera.

One camera is located below the screen, and the other is opposite the wrist of the wearer. It has a golden color casing.

The front camera has a 1080p resolution, and you could use it for making video calls. You can detach this camera by removing the watch face from its frame to get a picture.

The back camera has the function of translating the waist nerve into digital command. This technique is known as Electromyography (EMG) which is the first priority of Meta.

It has a similar design and some features to Apple watches. The dual camera is the crucial difference between Meta’s Smartwatch and the Apple Watch series.

This Meta’s watch will have 18 hours of battery timing with WiFi and cellular connectivity. Similarly, it will also have apps for Spotify, Watsapp, Instagram, photo gallery, and vice versa.

Also, the watch will include some features such as health, messaging, and fitness.

Besides the dual-camera Smartwatch, other rumors are in full swing that Meta is also working on many other watches. But, This Smartwatch is codenamed “Milan” and would have a target price of $349.

There was a plan to launch this watch in June 2022 which has been canceled. Now, there is no confirmation regarding its launch. It seems that it will roll out in the spring of 2023.