For now, according to the information that is public, Windows 10 S may disappear, giving way to an “S Mode”, which can be applied to any version of the tech giant Microsoft’s Windows, avoiding further updates.

The tech giant Microsoft’s Windows 10 S builds on the educational version of Windows 10. Its added security comes from the exclusive use of apps that are in the Microsoft application store and blocking all Win32 apps (.EXE).

The biggest problem of this version is the possibility to upgrade to a full version, which allows access to all other features of Windows 10. This has additional costs to the user and compels you to stay with the Pro version, which for many is too much.

The next step from the tech giant Microsoft, which we now know, seems to be to abandon Windows 10 S and create an S-Mode that will be applicable to any of the current versions of its operating system. This makes it simpler to update to the full version, getting the user to only get the version that they want and at a lower cost. 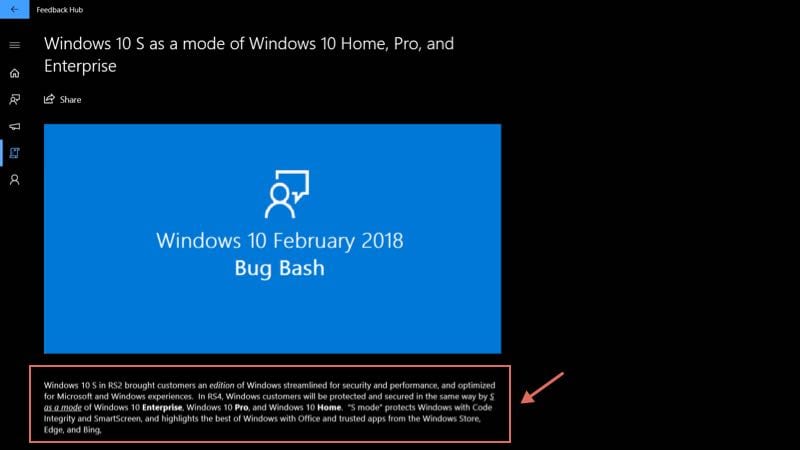 The need to diversify this offer, especially for Windows 10 Home, seems to be great. Data reveal that 60% of users do not upgrade to Windows 10 S and that they remain in this version.

“S Mode” will run apps from outside the app store

There is also information that S Mode will support applications that originate from outside its store, namely antivirus, something that is against the premises of Microsoft and even against its offer in this field.

All these changes should happen with the arrival of the next major update of Windows 10, which is expected to emerge soon, closer to spring. At that time we will know all the movements in this field and in particular this new “S mode”, which will protect users and ensure better performance.