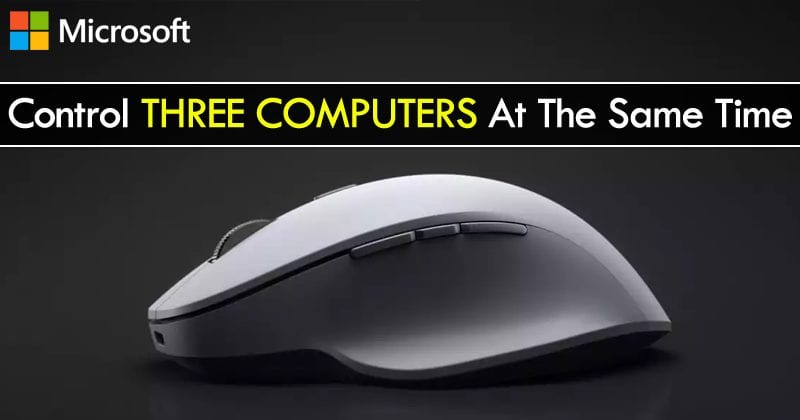 This Microsoft Mouse Can Control Three Computers At The Same Time

As for hardware development, the tech giant Microsoft has not been very successful except in a few cases, being the most representative, the products of the Surface family, which started with a tablet and today there are also desktop and laptop computers.

The most recent launch of the brand has been the Surface Book 2, which offers the power of a desktop computer, but with the ability to take it anywhere, which makes it one of the most powerful Surface products till to the date.

But the tech giant Microsoft has also designed interesting peripherals, such as the Surface Pen, a digital pen recognized for its high precision, or the Surface Dial, the cylinder that interacts with touch screens allowing easy access to menus on compatible applications.

But, in addition, there are also the mice of the brand Surface, which have a unique, comfortable and practical design. Soon a new device of this type will be available for sale, which can now be reserved.

This year, the tech giant Microsoft Arc Mouse went on sale, an arched mouse capable of “crushing” to be easily transported. This device was actually the Surface Arc Mouse, but with another name and color in order to focus on computers that were not from the Surface family.

Now, the tech giant Microsoft has announced that soon the Surface Precision Mouse will be released, which, as the name suggests, offers features that provide greater precision and practicality in its use.

Unlike the Surface Arc Mouse, its design is more “common”, offering a more ergonomic grip and with the ability to pair with up to three different devices by wireless connection, being compatible with Windows 10, Windows 7, Windows 8.1 and macOS.

The reserve of the Surface Precision Mouse can be made from the tech giant Microsoft Store page, although only in the United States, with a price of $99.99 dollars, while the deliveries and its official launch will begin next November 16.