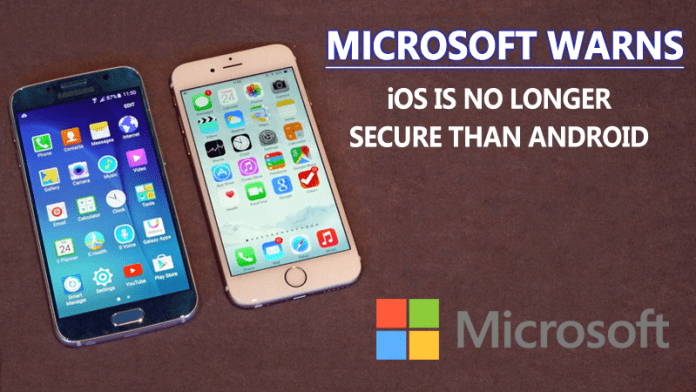 As we all know very well that iOS is the most secure operating systems which, in turn, Android has some levels of security. But, after all, they can all be wrong and iOS can be as or more insecure than Android. Hence, Brad Anderson, the vice president of Microsoft’s mobility warns that iOS is no longer secure than Android.

Microsoft Warns: iOS Is No Longer Secure Than Android

It is a general idea that the iOS is the most secure operating systems which, in turn, Android has some levels of security. But, after all, they can all be wrong and iOS can be as or more insecure than Android.

It was Brad Anderson, the vice president of Microsoft’s mobility, who came to alert everyone about this new reality. Anderson presented this idea based on recent cases of security breaches that affected iOS.

Specifically, he took as an example of the recent malware problem Pegasus, which was discovered by security firm Lookout. Second was discovered, this is the most persistent and sophisticated malware that exists for iOS, all should upgrade to the latest version of its operating system.

The information that Brad Anderson shared in an article published in a Microsoft blog, shows that this recent case shows that, iOS turns out to be equally or more vulnerable than Android and that everyone should focus on security issues.

Brad Anderson reinforces that mobile devices are constantly under attack, regardless of the platform used or applications that are used. Here is what he stated:-

“Over the last two years, I’ve had senior executives tell me countless times that they have unwavering implicit trust in the iOS platform. In these discussions it’s been pretty common to hear a comment like, “I don’t trust Android because it is like the wild, wild west – but I have tremendous trust in iOS because it is a controlled and procured ecosystem.” I’m not attempting to throw stones at Android or iOS – but there is a dilemma with this perspective. To be perfectly clear, the dilemma is this: I know for a fact that all the providers of mobile operating systems go to superhuman lengths to harden their platforms and do everything they can deliver the most secure operating system possible – but this fact also exists in our modern era of digital threats that produce consistent successful attacks despite the incredible efforts of the organizations building these platforms.”

Mobile devices are now a target with as much or more interest than computers, to have access to sensitive business information, and the safety is transversal and focused on all devices. Anderson also focuses that all companies should assume that they are in a vulnerable position and from there, build their defence systems to protect themselves.

But the most important point of this extensive article by Brad Anderson is that, nowadays, there are no perfect systems and that anyone can be attacked, often without the users are aware of it. Gone are the days when iOS was more secure than Android, as you can see, both systems are vulnerable and exposed users.