We all know very well that the large-scale storage of electricity has taken root in the energy market. Hence, now according to the latest reports, scientists have developed a new water-based battery that offers large-scale energy storage.

The new energy epic is slow paced by the lack of storage responses. Batteries have not kept up with the speed of technological evolution and there is more and more research in this area.

From Stanford comes the news of a new battery of water to store clean energy. A rechargeable hydrogen-manganese battery is designed for network storage: it has high capacity and long life and promises low costs.

Large-scale storage of electricity has taken root in the energy market. Today, storage devices such as lithium-ion, lead-acid, redox and liquid metal batteries offer a future for the industry by increasing investments. On the other hand, all these options, in one form or another, are still far from meeting the storage needs of the network.

The ideal structure will have to accumulate a lot of energy in a small volume and its cost will have to be less than $100 per kWh to be sustainable on a large scale.

It should also have a long lifespan, as explained by Yi Cui, a professor of materials science and engineering at Stanford University.

However, all the above options do not have at least one of these requirements. Lithium-ion technology, for example, has a high energy density (over 200 Wh/kg) but is still very expensive. 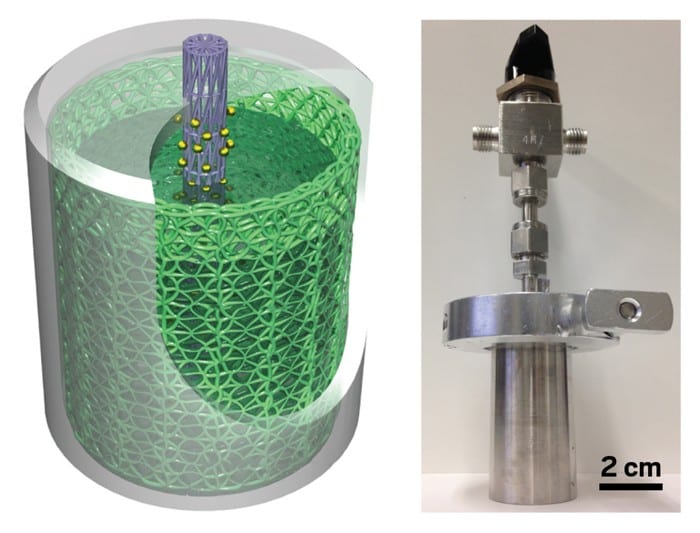 The same applies to redox batteries, which are very cumbersome systems. Lead devices, on the other hand, are inexpensive, but they last only 500 cycles and their energy density is low, a defect that is also found in new “liquid” solutions.

An alternative to the classical approaches is the new hydrogen manganese battery or, as scientists have called it, the water-based battery. It was created by a group of chemists led by Cui himself. 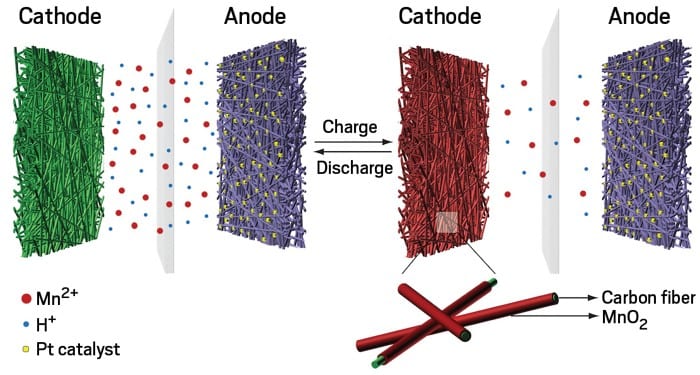 The prototype consists of a carbon fiber cathode inserted in a steel cylinder and wound around a small carbon anode loaded with platinum. The space between the two electrodes is filled with an aqueous solution containing manganese sulphate, an inexpensive industrial salt.

How does the “water battery” work?

During charging, the manganese ions pass from the solution to the cathode, where they combine with oxygen to become solid manganese dioxide. At the same time, the platinum in the anode catalyzes the hydrogen production reaction of the water.

The process is reversed during the discharge: the manganese ions dissolve in the electrolyte, the hydrogen is oxidized to form water and the electrons travel through the external circuit.

“What we did was simply add a special salt to the water, dip an electrode into that solution and create a reversible chemical reaction that stores electrons in the form of hydrogen” Professor Yi Cui explained.

The new water battery has a discharge voltage of ~ 1.3 V and a life of more than 10,000 cycles without degradation. It also has the gravimetric energy density of approximately 139 Wh/kg and volumetric density of 210 Wh/l.

Of course, the work is still at an early stage. The team used platinum as a catalyst, whose cost would be prohibitive on a large scale. For this reason, the next step will be to try cheaper catalysts – the group has already identified a few – to reduce the total cost to less than $100 per kWh.