Tech Viral
Home News Security No One Is Immune to Ransomware. Here’s How to Protect Yourself

Imagine turning on your computer one morning, only for a message to pop up that says you can’t access your computer unless you pay $1,000. That nightmare unfolds on a daily basis across the world and is known as a ransomware attack. These attacks aren’t inevitable, though. You can protect yourself by taking precautions — read on to learn more.

Back Up Your Data, But Be Smart About It

Many people simply pay a ransom to be able to “unlock” their computer again. Their attitude has made ransomware one of the most lucrative forms of cybercrime today.

That’s why backing up your data frequently is one of the best defenses against ransomware. When your data is backed up, you don’t need to worry about being locked out of your computer, because your files are still safe.

That being said, even backing up your data won’t help if you don’t do it correctly. There are ransomware attackers that search out backup storage systems to encrypt. Backing up your information to the cloud will frustrate these criminals. Don’t want to use cloud backup? You can still use a local storage device or server — just make sure they’re offline and not connected to desktop systems so that they won’t be vulnerable to attacks.

Some antivirus software offers consumer ransomware protection. Its goal is to detect such files before they infect your computer and wreak havoc.

The best antivirus software protects computers from ransomware by blocking threats from known sources of infection. It will prevent you from connecting to dangerous websites, including links appearing on social media networks and those that make it into your email inbox. Moreover, top antivirus software not only detects ransomware — it deletes the contagion from your system before it launches.

Preventing ransomware attacks requires vigilance on your part, too. Hackers have found that email is a great way to transmit ransomware. They can create fake email addresses that look like those of companies or government agencies, so you’ll feel as though it’s necessary to open them. Another trick cyber criminals use is to spoof email addresses of people you know — it might appear as though the email is coming from your Uncle Dave because his name is on the sender line.

Just because an email looks official doesn’t mean it actually is. If you don’t recognize the sender’s name, don’t open the email. Even if you think you do know the sender, read the email address carefully. The hackers might have used your Uncle Dave’s name, but if you check, you’ll discover it’s not his email address. 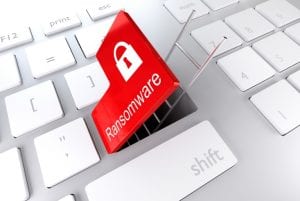 Downloaded software is another source of ransomware infection. Hackers rely on computer users’ love of free and illegal software to transmit viruses.

Before you download free software, remember the saying, “If it sounds too good to be true, it probably is.” That program might come with some unwanted additional features, such as ransomware that costs a fortune to remove. It might not save you money now, but not downloading free software definitely will in the future.

When is the last time you updated your software? If you don’t remember, or the answer is, “never,” it’s well past the time for this critical security measure.

Think of your computer’s software as a fence. Over time, every fence develops holes or gaps. The larger those openings are the bigger the threat that can get through. When software becomes out of date, hackers can exploit vulnerabilities to launch attacks such as ransomware.

Software vendors are aware of these weaknesses. That’s why they periodically offer free updates and patches to close those gaps. You’ll feel horrible if you’re the victim of a ransomware attack that could have been averted because you didn’t take advantage of a way to close security loopholes. Take a few minutes and download patches and updates today.