We all know very well that like almost every weekend, new information about the future Nokia 2 appears. Hence, recently, the future upcoming cheapest smartphone of the Finnish company Nokia, of course, the Nokia 2 specifications leaked via Antutu listing.

Like almost every weekend, new information about the future Nokia 2 appears, the most economical and modest mobile of the Finnish company Nokia that will surely arrive before the end of the year. Today we have known almost all the technical data of the Nokia 2 thanks to AnTuTu.

Precisely last weekend we knew the price at which the new Nokia 2 could reach the market, and surely would not exceed the psychological figure of $100, according to the filtration of an American retailer.

The Nokia 2 is going to be the most affordable mobile of the firm, the one that will undoubtedly attract many users who just want the phone to call and chat. For those, this Nokia 2 will be ideal, and in its passage through AnTuTu with its codename Nokia TA-1035, where it has confirmed that its processor will be one of the most accessible of Qualcomm, as is the Snapdragon 212, a processor that we are not very used to see in the West, and that mostly mounts in mobile phones from emerging countries. Together with the processor, we found the Andreno 304 GPU as well. 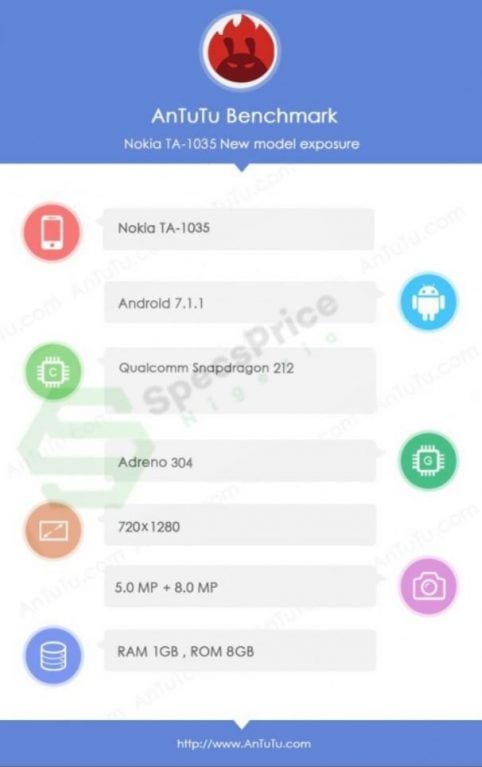 The screen has an HD resolution of 1280 x 720 pixels, and although it does not appear in AnTuTu it will have a size of 5-inches. Storage and RAM are also very basic aspects. In fact, the Nokia 2 in AnTuTu reveals that it will have a RAM of 1GB, while the internal storage will be only 8GB, yes, it will be expected to be extended by microSD cards.

In the same way, the camera will also be very fair, with an 8-megapixel sensor on the back, while the front sensor will be 5-megapixels, so there will be many differences between them.

In addition to the step by AnTuTu the Nokia 2 has revealed that it has Android 7.1.1, so as the rest of the range of the Firm is expected to receive Android 8 Oreo very soon, it is even possible that it reaches the market with that version of Android.

In this way we know almost all the technical sheet of the Nokia 2 thanks to AnTuTu, we only need to confirm the battery, which according to previous leaks and rumors could be 5000mAh, a capacity that taking into account the characteristics of this terminal could give two or three days of autonomy.