Contents show
Nokia 8 Pro Is Coming To Fix The Nokia 8 Sirocco’s Biggest Problem
Nokia 8 Pro, the true top of the range for this year

Nokia may have saved an ace up its sleeve this MWC 2019 and still surprise us in the coming months with the Nokia 8 Pro, and we already know the first list of features thanks to a recent leak.

Although facing the gallery many say it has been a great MWC 2019, the best of recent years, we confess that the reality and what was discussed in private was very different. The Samsung roller with the Galaxy S9 has made many brands keep a few tricks up their sleeve. Although Nokia brought to the fair novelties such as the Nokia 8 Sirocco, the Nokia 1 and the Nokia 8110 4G, it seems that some wildcard was saved to give the bell alone in the coming months.

Nokia 8 Pro, the true top of the range for this year

It seems that the Huawei P20 or the LG G7 has done, the Finnish company Nokia wants to have the lights for it alone with the Nokia 8 Pro this year, which would be the true “top of range” of the company according to the list of features filtered, a premium version of the Nokia 8 last year.

It would have the Snapdragon 845 – instead of the Snapdragon 835 of the Nokia 8 Sirocco model – the star processor of Qualcomm that few phones have confirmed, such as the Xperia XZ2 and XZ2 Compact. It would offer a 6-inch screen in the FullHD+ format, or what is the same, aspect ratio of 18:9 with 1080 x 2160 pixels.

Inside it will hide up to 8 GB of RAM, along with a model of 6 GB, which we assume will correspond to 128GB and 64GB of storage space respectively. Its features will be a 13 MP camera on the front and a double rear optics with two 16 MP sensors respectively. Wireless charging and USB Type C for a huge battery of 4000 mAh, perhaps one of the most interesting details of this device. 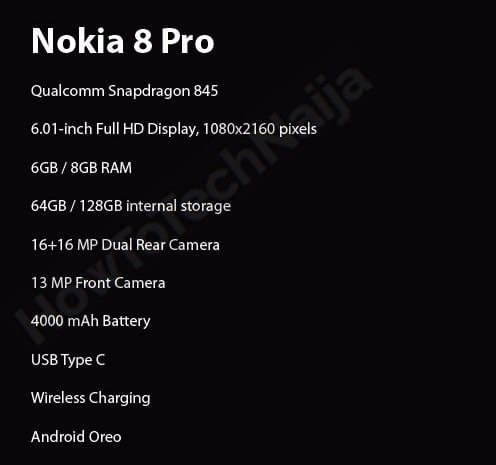 In addition to the list of specifications, little else we know about this terminal that the company HMD Global, who is behind the Nokia brand, would have saved in the portfolio to try to scratch a little more prominence. And despite the Nokia 8 Scirocco caught the eye, many people were left with the company had brought to the fair the “retro-edition” of the year and little else.

It is a policy that was also the subject of conversation between more than one partner, if the company is doing well pointing the brand to this type of products that although they have a great media impact, they do not allow to shine as it should be to the true reasons of the return of Nokia, the Android phones that want to conquer, above all, the premium mid-range (Nokia 7 Plus) and the high-end (Nokia 8 Scirocco).