We all know that the next revolution in data storage may come from DNA. Yes, it sounds a bit odd to many of you but, it is true. As, recently, Harvard scientists have inserted a GIF of a horse into living bacteria.

OMG! Scientists Just Encoded A GIF Into The DNA

The next revolution in data storage may come from DNA. Several studies prove that it is possible to store and retrieve text, images and even videos of these essential molecules for life.

So far, the data were stored in synthetic DNA. But in an article published today, Harvard researchers show how it is possible to record information in the DNA of living bacteria – including a GIF – and retrieve them with 90% accuracy.

The genetic code has a logic similar to the binary system used in computers. On hard disks, the data is represented by zeros and ones; The DNA, in turn, uses four chemical bases (A, T, C and G). Then the number 1 could be represented by the AT pair, and the zero would be the CG combination.

But how to write data to a living cell? This is possible thanks to CRISPR, a technique that uses enzymes to cut specific areas of DNA with relative accuracy and efficiency.

This technique is inspired by a mechanism of defense of the bacteria. When attacked by viruses, they cut parts of the invader’s DNA to paste inside their own DNA, as a kind of immune system.

These attacks are “recorded” in the reverse chronology of when they occurred. That is, the sequences become a living physical record of all the different viruses that have invaded the cell. 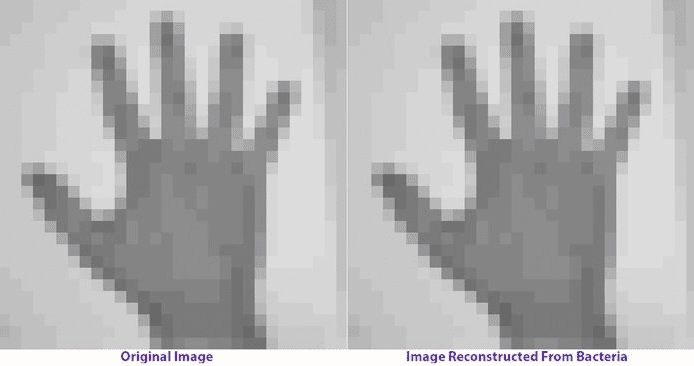 The Harvard team used this mechanism to record data on the DNA of E. coli bacteria. First, the scientists encoded images and videos – composed of black and white pixels – in the form of DNA.

Then, they passed an electric current on the bacteria: this opens small channels in the cell wall, allowing the synthetic DNA to enter. So E. coli did what it usually does: it took the “invading” DNA and incorporated it into its own genome. The cells then multiplied.

To retrieve the information, the team sequenced E. coli DNA and entered the data into a computer program, which successfully replicated the original images. It is the picture of a hand; And a five-frame clip of Animal Locomotion, created by photographer Eadweard Muybridge in the 19th century.

For now, this method can not handle much information – the video is only 36 × 26 pixels – but it is promising. Jeff Nivala, the co-author of the study, tells Wired that this is a proof of concept for future work with CRISPR, and further, “our real goal is to allow cells to collect information about themselves and store it in their genome So that we can analyze later.