OnePlus is working to bring its next series of smartphones. OnePlus 10 Series is expected to launch in the quarter of 2022. However, a few of the details of the upcoming smartphone have been leaked via a tipster.

The leaked details show the specifications, price, design, and other details of the OnePlus 10 Pro. It is said that the OnePlus 9 Pro successor will have a triple camera setup at the back with an LED flash. 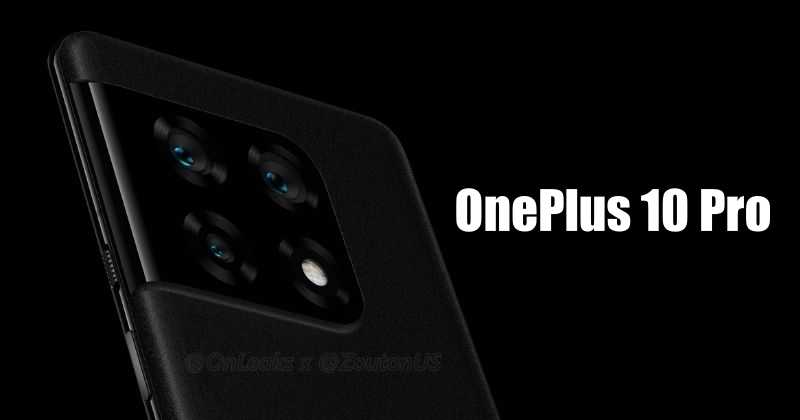 A popular tipster Steve Hemmerstoffer (@OnLeaks), has posted a tweet showing the OnePlus 10 Pro. In collaboration with publishing platform Zouton, the upcoming device will have a huge camera module with three sensors and an LED flash. Below the camera, there is the OnePlus logo, and the phone has a matte finish.

Sooo… I'm back from the Future again, this time with the very first and early look at the #OnePlus10Pro in form of stunning 5K renders!

According to the leaked details, there will be two variants. The display will be of 6.7-inch LTPO Fluid 2 AMOLED display with 1440 x 3216-pixel resolutions. The refresh rate is 120Hz and an aspect ratio of 20:9.

However, the details are not officially confirmed by the company. Also, the leaked reports don’t give much information about the OnePlus 10 Pro.

The power button is on the right side of the phone, and the left side, there are volume buttons. OnePlus logo is on the rear side of the device. It looks like the device will have a textured finish and could have a metal chassis.

There is no fingerprint sensor at the back, so that it might be an in-display fingerprint. The OnePlus 10 Pro will be powered by the latest Qualcomm Snapdragon 800-series high-end processor.