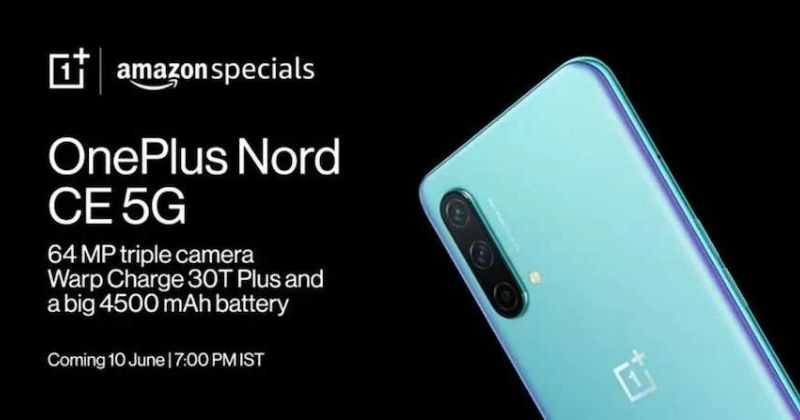 OnePlus is all set to launch a new smartphone OnePlus Nord CE 5G on 10th June in India. But ahead of launch few of the specifications and price is leaked and the surprising thing is the same price is available on the official website also.

Already OnePlus has teased a few of the features of the upcoming device like its design, and cameras. It is said that there will be a punch-hole display design and a 64MP main sensor at the back.

A well-known tipster named Ishan Agarwal has posted a tweet, in which he has shared the price of all the upcoming gadgets by OnePlus. On 10th June, the company is going to announce the OnePlus Nord CE smartphone and the OnePlus TV U1S.

Apart from this, there is news that a known leakster named Mukul Sharma has also revealed the same details from the leaked HDFC Bank document.

OnePlus Nord CE 5G will have a 6.43-inch AMOLED display with a refresh rate of 90Hz. The device will be 7.9mm thick and will have a  headphone jack of 3.5mm. There will be 8GB of RAM and internal storage of  128GB.

The main camera will be 64MP with an 8MP ultrawide lens and a 2MP depth sensor. And selfie camera will be 16MP. It is powered by Qualcomm Snapdragon 750G and will run on Android 11 OS.

A couple of days back, specifications of the upcoming OnePlus TV U1S were leaked and now the smartphone details are leaked.

The launch event of OnePlus is on 10th June at 7 pm IST. At this event, the company is announcing TVs and smartphones. The gadgets will be available for sale on Amazon and Flipkart. All the Red Cable subscribers can buy the gadgets on the same day.