We all know very well that the South Korean giant Samsung will soon introduce foldable smartphones, but, now according to the latest reports, the well-known Chinese smartphone manufacturer, of course, I am talking about Oppo has just registered a patent for a foldable smartphone with the flexible display.

So far the most outstanding in terms of patents and projects seen, the South Korean giant Samsung has just emerged a competitor in the future market of folding or flexible screen smartphones. Because the Chinese smartphone company Oppo has set its sights on the flexible smartphone segment.

Now that the goal of achieving a screen without frames is almost achieved – this 2019 we will see several models that will reduce the edges to a minimum and in some cases even eliminate them -, the South Korean giant Samsung was the first to look forward, to the next step as soon as to the future design of the terminals. And for the Korean brand, that step is the flexible screens, which will allow to put in the market folding smartphones that can become a tablet when opened.

At the beginning of January appeared a roadmap on the Samsung Galaxy X, name that is known to be the first terminal of the South Korean giant Samsung with the flexible screen. If said roadmap turns out to be true, then the Galaxy X would begin its mass production in November of this year, with a view to a premiere in December or January 2019. But the race has been joined by a new rival: the Chinese brand Oppo.

One of the most important brands in the mobile market, Oppo has decided to consider the future of smartphones in the form of a registered patent on a flexible smartphone that closes on itself on the one hand, similar to the design that the South Koran giant Samsung presented for the first time in 2014 in the form of conceptual design. Unlike the concept of the ZTE Axon M, which is basically two smartphones joined by a hinge, the Oppo project is more like the folding panels that the South Korean giant Samsung is working and showing. 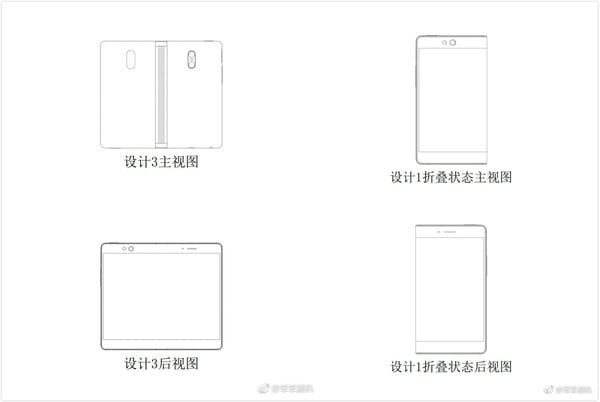 The curious design of this Oppo is that the prototype does not close the screen inward, but outward, so when the device is in smartphone mode, it is a terminal with front screen and rear screen, both with frames. At the moment this is nothing more than a patent, but it shows that the South Korean giant Samsung is not alone in the race for the first flexible terminal. We have already seen patents from the tech giant Apple and the South Korean giant LG before, but this one from Oppo confirms that there would be more companies interested in a design that promises to be a standard in the future.

So, what do you think about this new patent which is registered by the well-known Chinese smartphone manufacturer Oppo? SImply share all your views and thoughts in the comment section below.