Oukitel U18 – Meet The Best Android Clone Of The iPhone X

One of the most eye-catching features of the tech giant Apple’s flagship smartphone, of course, I am talking about the iPhone X is the notch at the top of the screen, which houses the sensors for facial recognition through Face ID.

However, now if we analyse the smartphone market then we can see that some Chinese smartphone manufacturers have already started adopting this element of design to make the tech giant Apple’s flagship smartphone, of course, iPhone X clones. 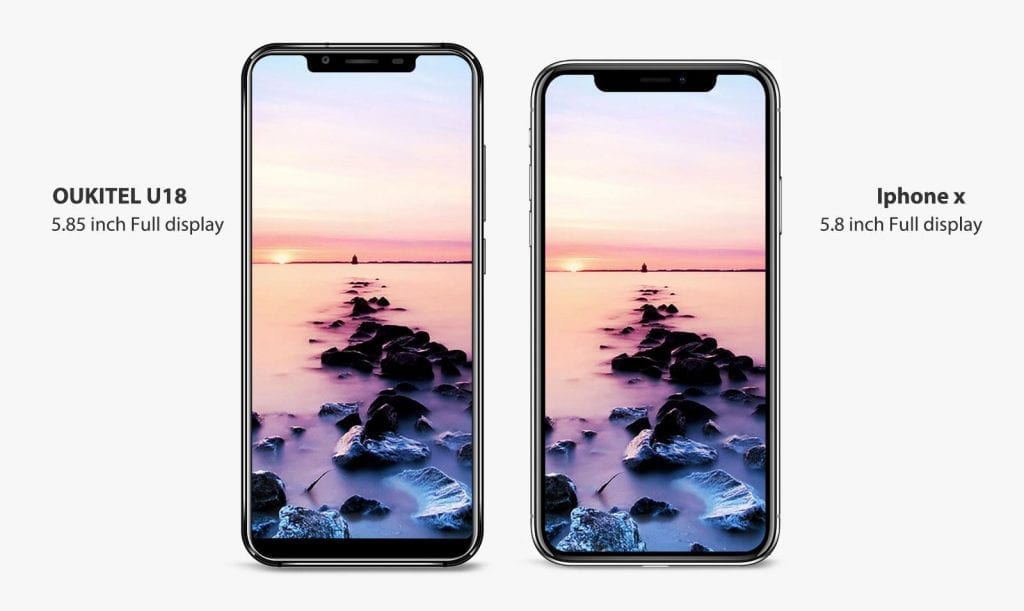 The manufacturer also copied the lower edge of the Galaxy S8 – and even the Samsung icons – so the screen still does not occupy as much space as possible on the front.

The “ultrawide” screen has a 21:9 ratio, used in CinemaScope or anamorphic movies. However, as SlashGear recalls, the most content available for mobile phones is formatted at 16:9.

And since the 5.85-inch screen has a resolution of only 1512 x 720, you can only watch HD videos. This may be useful for multitasking, however, giving you more room for two apps at a time.

On the inside, the Oukitel U18 features intermediate specifications: MediaTek MT6750T processor, 4 GB RAM, 64 GB internal storage along with the expandable storage, and 4000mAh battery. There is also a digital reader at the rear, yes, I am talking about the fingerprint reader.

The rear camera is dual, with 16 and 5-megapixel sensors made by Sony. Meanwhile, the front camera has 13-megapixel. And not only that even this device also comes with the “Face ID” feature, which is just the facial recognition built into Android since the Ice Cream Sandwich – and that can be fooled by a photo as well.

Oukitel is selling this device in limited edition. It will produce 999 units, which will cost US $160 until next Wednesday (7).

So, what do you think about this new iPhone X clones, of course, Oukitel U18? Simply share all your views and thoughts in the comment section below.