Contents show
The Pirate Bay’s Iconic .SE Domain Is Back In Action
Thepiratebay.SE was reborn?

The Pirate Bay’s Iconic .SE Domain Is Back In Action

There has not been much talk in torrent sites, in court attacks on this content or even referred to the developments of the case that still runs in court related to The Pirate Bay. But nevertheless it remains one of the largest sites, if not even the largest, to “get” piracy.

Those who closely follow the developments certainly realized that the iconic domain thepiratebay.se, which is the primary access that many “pirates” use to gain access to their favorite torrent site, has undergone some changes. In a surprising action, this domain was deactivated last week.

It appeared that the historical domain registration had expired and people could not use the same to visit the legendary site. However, according to information presented in TorrentFreak, thepiratebay.se is already operating normally and forwards visitors to thepiratebay.org. 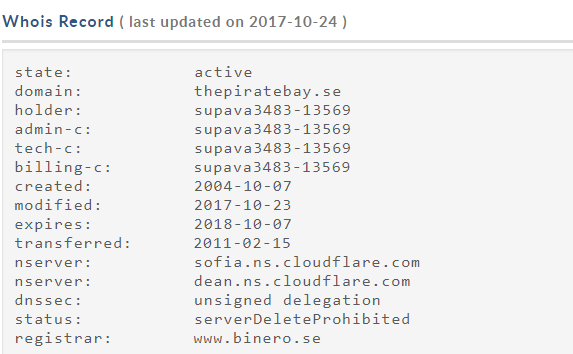 The hypothesis of a court order is right because we know that earlier this year in February the Swedish court ruled that The Pirate Bay would have to be blocked for the next 3 years by the local ISP Bredbandsbolaget. The court emphasized that the injunction was in line with EU law. In addition to that, in June this year, the European Court of Justice stated that ISPs should block the Pirate Bay.

In 2013, a local anti-piracy group filed a motion to imprison the domain. This resulted in a lengthy legal battle where the Swedish Court of Appeal eventually ruled that the Pirate Bay domain should be confiscated and handed over to the State. In early 2014 a police raid left the site inactive and began an unprecedented walk in the courts.

However, the lapse has not yet occurred, since the case is still pending in the Supreme Court. Therefore, Pirate Bay owners are not allowed to change the details of the domain and may be why it expired initially. Strange was this to have been updated and to have gained another year of life.