Did you know about the tech giant Google’s Android update policy? Let me clear that Google has a policy of updating their Android devices for up to two years after launch and recently, the company detailed the dates on which the Nexus and Pixel lines will no longer receive updates and security fixes.

This Is When Google Pixel Will Receive Its Last Android Update

The tech giant Google has a policy of updating their Android devices for up to two years after launch. This week, the company detailed the dates on which the Nexus and Pixel lines will no longer receive updates and security fixes.

Nexus and Pixel devices receive Android updates for at least two years from launch; After that, “we can not guarantee additional updates,” the tech giant Google says. However the security patches have a longer term: at least three years after launch, or at least 18 months from the last sale, whichever is longer.

This means Pixel and Pixel XL will no longer receive new versions of Android after October 2019. While security updates are guaranteed until October 2019. Meanwhile, this is the calendar for the Nexus line. 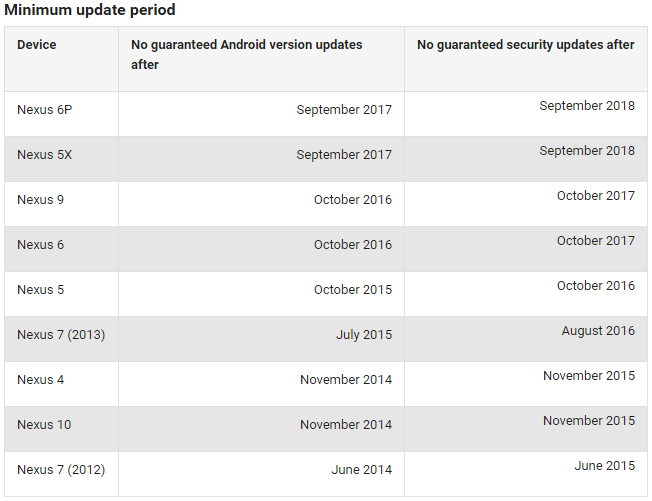 The Nexus 5X and Nexus 6P should be upgraded to Android O, which is expected to be released this year. While Nexus 6 and Nexus 9 must remain in the Nougat, and older models will not even receive security updates.

Why is this important? That’s because, with this policy, the tech giant Google sets the pace at which other manufacturers must update their Android devices worldwide.

In fact, the tech giant companies like Samsung, LG, Sony and others usually release two major upgrades for top-of-the-line smartphones and leave out the cheaper handsets. Moreover, if we note then we will be able to notice that Motorola and Samsung are the fastest in releasing Android updates to eligible models, while the big brand like Asus is still in the lollipop.

Because of this policy, new versions of Android take longer to reach more users: as it is clearly visible that the latest version of Android, Android Nougat is available in less than 5% of devices. While Android Lollipop is still the most used (32%) and the Android Marshmallow is getting close (31.2%), eighteen months after its launch.