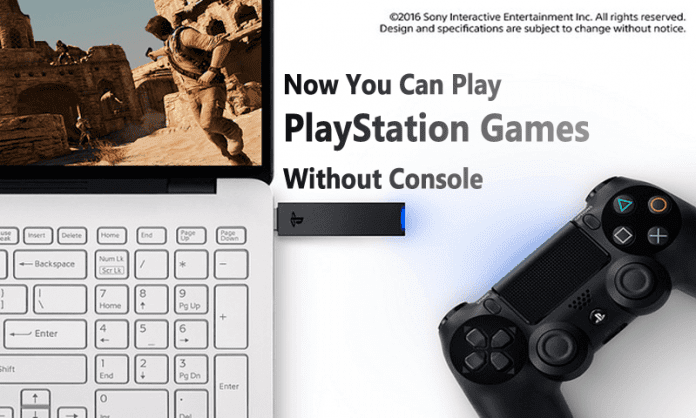 Sony recently announced the arrival of the PlayStation Now service to PCs with Windows operating system. Gamers can enjoy popular games like Uncharted, God Of Wars on their computer without any emulator or any Playstation hardware.

PlayStation Games Can Now be Played on PC Without Console

Are you ready to play popular games like Uncharted, God Of Wars on your computer? Recently Sony revealed that PlayStation Now is making the jump to Windows PC. We have also seen Microsoft Promised to bring Future Xbox Titles to Windows 10.

Sony is fully prepared to roll out the video game streaming service PlayStation Now to the PC. The company mentioned that PS Now will be available “overseas in parts of Europe soon and will come to North America shortly thereafter”

You won’t need to own any Playstation hardware to play PlayStation Games. You don’t need any emulator to run PlayStation games on your Computer. Sony also announced a wireless adapter platform that lets you connect a DualShock 4 to PC and Mac Wirelessly.

The wireless adapter will activate each and every feature of the controller like buttons, touchpad, light bar, motion sensors, etc. The accessory will also be compatible with Remote Play, where you can play remotely via a PC / MAC.

For those who want to run PS Now on their computer will need some high-speed internet connection to make it function properly, the minimum of 5Mbps speed is required. PS Now’s library have over 400 Games now.

According to the company, here are the recommended specs to run PS Now on Computer:

The DualShock 4 USB Wireless Adaptor is expected to launch in early September at the price of $24.99